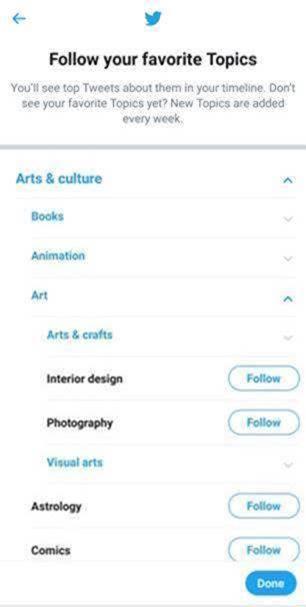 While Twitter serves up a buffet of conversations, product features like Twitter Lists and Topics empower people to customise their ‘feed’ and follow discussions that appeal to their palate and resonate with their interests. Through these features, you can choose the content you see on the service and organise your timeline as per your preference.

Twitter Lists are a compilation of various Twitter accounts, and you can create your own Lists or follow Lists created by others. With Lists, you can put together your favourite accounts that Tweet on a particular subject such as food, parenting or any other, and populate a List timeline. Viewing a List timeline will show you a stream of Tweets from only the accounts on that List.

Topics, on the other hand, use machine learning to find related Tweets on a subject. Twitter has Topics across numerous interest categories that you can follow to see the best Tweets about what’s happening on the things that matter to you. When you choose to follow a Topic – whether it’s your favorite band, sports team or celebrity – you’ll see Tweets from a whole host of accounts that are experts, fans or just tend to talk about that thing a lot on Twitter.

Expand your culinary horizons and #ChooseYourFeed with Twitter Lists curated by some of India’s most well-known food influencers and celebrity chefs. Through these Lists, you can personalise your Twitter timeline and inject food conversations into it. Moreover, viewing a List timeline shows a stream of Tweets from only the accounts on that List, making it easier for people to find what interests them, in this case, all things food. Some of India’s most celebrated chefs including Thomas Zac (@ChefTZac), Maria Goretti (@mariagorettiz), Prateek Sadhu (@PrateekSadhu), Kelvin Cheung (@chefkelvincheung) and Ranveer Brar (@ranveerbrar) have put together Lists of their favourite food accounts on Twitter.

Here’s a look at these lip-smacking Twitter Lists curated by culinary influencers and celebrity chefs on Twitter:

Chef TZac (@ChefTZac) of the Bombay Canteen has followed his passion for discovering new flavours since a young age. Here is the food List curated by him:

Maria Goretti (@mariagorettiz), who was a VJ with MTV in the ‘90s, is now a Cordon Bleu certified chef and baker. Here’s the List of food accounts that Maria follows on the daily:

Prateek Sadhu (@PrateekSadhu), executive chef and co-owner of Mumbai’s Masque restaurant started cooking when he was just 11 years old and is passionate about bringing a holistic, sustainable wilderness-to-table approach Indian cuisine. Here’s a List of his favorite food accounts on Twitter:

Celebrity Chef Kelvin Cheung’s passion for world cuisines and his knack for experimentation is popular amongst food-lovers. He too (@chefkelvincheung) shared a List of the food accounts he follows:

Another way to follow the latest food conversations is to follow the various Topics on the subject. Vegetarianism, fast food, organic foods, and food inspiration are some of the food related Topics that you can follow on Twitter.

With an aim to skill, reskill and upskill country’s youth in the shipping sector, The Ministry of Skill Development & Entrepreneurship partners with The Ministry of Shipping. – Adarsh Maharashtra