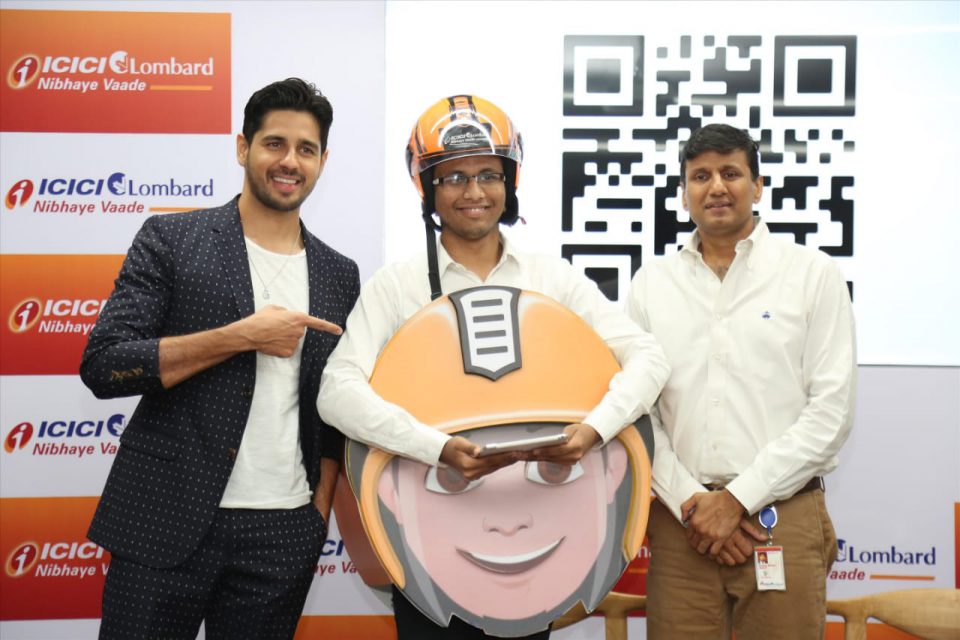 Mumbai, February 19, 2020: When a 20-year-old biker went on a road trip to Ladakh with his friends, his parents were both happy and tense. While they wanted their son to have a great time, they were also worried about his safety. His mother, in particular, did not want to ruin his adventure by constantly calling or texting him to stay safe. She searched for an emoji to remind him to wear helmet, but she could not find one. She wished there was a helmet emoji to remind her son to wear one every time he hit the road. After all, there were emojis for scooters and motorcycles. Why not for riders?

ICICI Lombard’s decision to launch the world’s first-ever motorbike helmet emoji is born out of every parent’s concern, — a friend’s need to wish their dear one’s to wear a helmet— and the fact that two-wheelers accounted for the highest number of road accidents in India. In 2018, over 20,000 two-wheeler deaths were attributed to non-wearing of helmets.
The grim statistics prompted ICICI Lombard, one of the country’s largest private general insurance companies, to unveil a first-of-its kind campaign for a helmet emoji in the interest of road safety.
The campaign aims at getting the maximum number of people to sign a nationwide petition for launching the emoji. It will use crowdsourcing to encourage people to come forward and sign the petition. The tagline — Sign karo petition, aur banao mujhe bhi Emoji — will help create awareness about the movement, generate conversation about riding safety among people as well as on social media, and stress the importance of road safety among bikers.
ICICI Lombard’s unique petition is aimed at impressing upon the Unicode Consortium, a US-based non-profit organisation responsible for maintaining and publishing the Unicode Standard, highlighting the urgent need for a Motorbike Helmet emoji to add to the larger cause of road safety, especially among two-wheeler riders and their loved ones.
ICICI Lombard General Insurance Executive Director Sanjeev Mantri, said, “As an insurer, we are committed to work towards the safety and wellness of the society at large. We are creating a safer community by educating Indians on road safety measures under our ongoing ‘Ride to Safety’ campaign. We envision an India where every two-wheeler rider and pillion rider wears a helmet every time he or she is on the road. Our endeavour to introduce a helmet emoji is an extension of our efforts in this direction. Through this campaign, we wish to introduce communication tools that are in sync with the new age messaging ways adapted by Gen Z.”
Being a responsible corporate citizen, ICICI Lombard continuously strives to be socially responsible and provides solutions through various initiatives. Under its ‘Ride to Safety’ initiative, the insurance company has launched impactful activities such as workshops, rallies and other on-ground programmes. Since September 2015, more than 500 workshops have been conducted in various schools across Mumbai, Pune, Delhi, Nagpur, Chennai, Bengaluru and Ahmedabad. ISI-marked specially-designed helmets have been given to over 1 lakh children and parents. Overall the initiative has positively influenced over 5 lakh people and their families.
Link to sign the petition- https://bit.ly/38Fooz0
Link to the AV – https://bit.ly/37EsJkT
ICICI Lombard General Insurance Company Ltd.
We are one of the largest non-life insurer in India based on gross direct premium income in fiscal 2019. We offer our customers a comprehensive and well-diversified range of products, including motor, health, crop, fire, personal accident, marine, engineering and liability insurance, through multiple distribution channels. More details are available at http://www.icicilombard.com.

Granola launches its ‘back to work’ campaign. – Adarsh Maharashtra

Mercedes-Benz presents a rare mix of unique product, future of mobility and cutting-edge R&D and technology at the 15th Auto Expo. – Adarsh Maharashtra