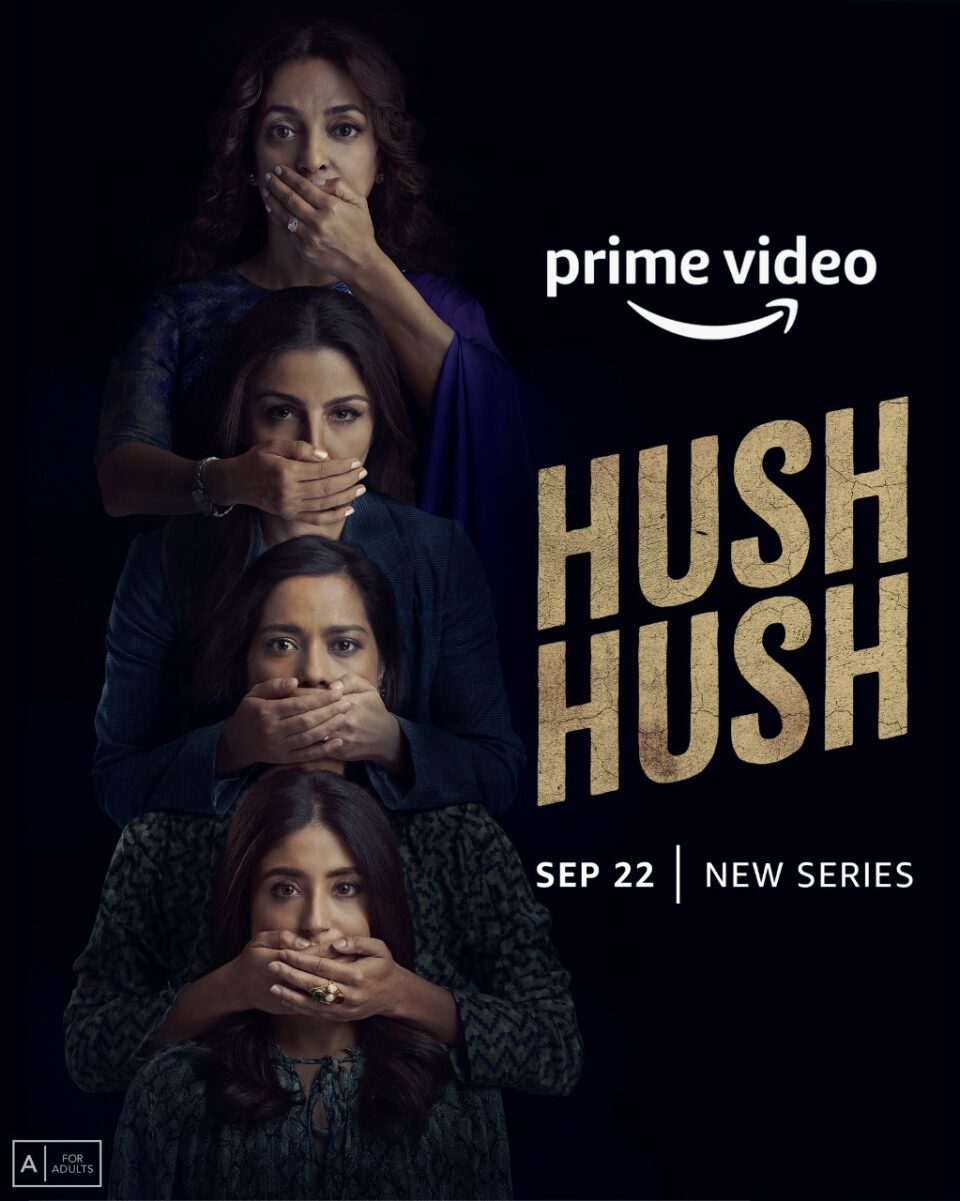 MUMBAI, India—07 September, 2022—* Championing female-forward stories, Prime Video today announced the launch date of its ambitious series, Hush Hush, that features a cast and crew led by women. Produced by Vikram Malhotra-led Abundantia Entertainment, the series marks the digital debut of Juhi Chawla and Ayesha Jhulka, and also stars Soha Ali Khan Pataudi, Kritika Kamra, Shahana Goswami, and Karishma Tanna in the lead. Hush Hush revolves around a set of women whose picture-perfect lives begin to come undone when an unexpected event brings to the fore secrets from their past and threatens everything that’s dear to them. Knitted in a web of lies, deceit and fighting patriarchy, the story explores the storm that brews behind the seemingly quiet façade of the privileged lives of these women. Hush Hush is co-created by Abundantia Entertainment and critically acclaimed director Tanuja Chandra (Qarib Qarib Single, Sangharsh, Dushman). Prime members in India and more than 240 countries and territories can stream the series from September 22.

What makes Hush Hush even more unique is that it features a cast and crew primarily comprising women, right from the Production Designer, the Costume Designer, the Associate Producer, the Co-producer, to teams in the Art, Costume, Production and even the Security functions. Acclaimed writer Juhi Chaturvedi (Gulabo Sitabo, Piku, Sardar Uddham Singh) has written the dialogues, Kopal Naithani has directed two episodes in this season and Tanuja Chandra double-hats as director and executive producer. Additionally, story has been written by Shikhaa Sharma (Jalsa, Shakuntala Devi, Sherni) who is also one of the Executive Producers on the series.

“Women are 50% of the population, yet stories told by them and from their perspective are far and few in between,” said Aparna Purohit, Head of India Originals, Prime Video. “At Prime Video, we are committed to giving a global platform to diverse, authentic and relatable female stories, and with Hush Hush, we are taking our commitment to female-forward narratives a step further. Hush Hush is an emotional and intriguing story with nuanced, flawed and complex women who light up the screen. We are thrilled to join hands with Abundantia Entertainment once again to create a story that amplifies female voices in both, reel and real life!”

“Abundantia Entertainment is all about engaging, impactful, meaningful and entertaining story-telling. In pursuing our philosophy of bringing disruptive content to our audience, we also proudly champion female-first narratives – stories of and around powerful women, told by equally powerful voices,” added Vikram Malhotra, Founder & CEO of Abundantia Entertainment. “Films like Shakuntala Devi, Sherni, Chhorii and the recent Jalsa are examples of such work that has resonated in a big way with fans all over the world. And I am delighted that in Prime Video we have found a partner that supports and believes in these stories. After these films, and the much-loved Breathe, our partnership now reaches the next level with Hush Hush. This gripping tale is brilliantly put together by a never-before leading cast and crew almost entirely made up of talented women and I am confident that Hush Hush will set a new benchmark in amplifying female voices, especially in the portrayal of strong characters set in a world around us”.