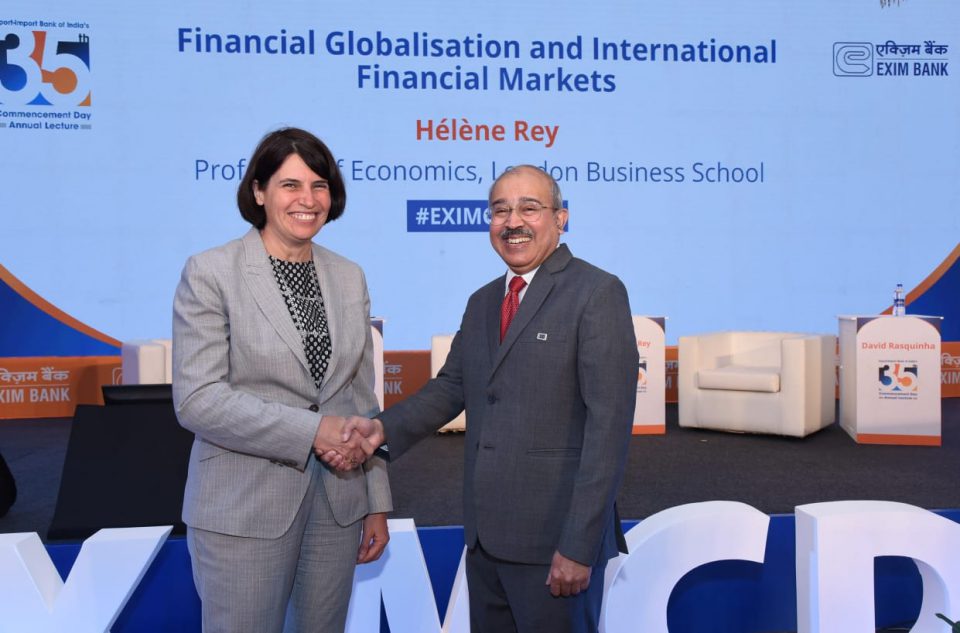 Mumbai, March 02, 2020: “The Dollar is to currencies what English is to languages”, Professor Hélène Rey, Lord Bagri Professor of Economics, London Business School remarked during the Export-Import Bank of India’s (Exim Bank’s) 35th Commencement Day Annual Lecture. Speaking on the topic, “Financial Globalisation and International Financial Markets”, Professor Rey highlighted that the US dollar is the dominant international currency, with nearly 62.2 percent of international debt, 56.3 percent of international loans, and 62.7 percent of foreign exchange reserves denominated in the US dollar. She also mentioned that India is among the most dollarized countries as far as trade invoicing is concerned.

Prof. Rey explained how the dominance of the dollar in international trade, international banking and asset markets matters for international transmission of shocks and macroeconomic policies. She noted that international financial linkages have risen dramatically, which has concomitantly increased the importance of cross border spillovers of policy actions. She explained how in a dollar hegemonic system, the monetary policy of the US Federal Reserve sets the tune for the global financial cycle, and how it may affect the balance sheets and risk appetite of financial institutions in other countries.

Mr. David Rasquinha, Managing Director, Exim Bank also highlighted the fragilities associated with greater financial openness. He noted that while theoretically, rising capital flows in emerging market economies should support growth, in reality, financial openness has, rather, proven to be a double-edged sword, leaving emerging markets vulnerable to foreign shocks. He further added that the effect of policies taken by the US on the international monetary system during the recent times is discernible, and some of the negative effects are disconcerting.

In her lecture, Professor Rey further explained the difficulties for the US to remain a world banker or insurer. She opined that the equilibrium in which the Dollar is the dominant international currency is becoming more unstable over time as the relative size of the US in the world economy is shrinking, while the stock of dollar liabilities in the rest of the world is consistently growing. As the current configuration of international monetary system may not be stable, Professor Rey explored the potential changes in the international monetary order.

Analysing the alternatives to the US dollar, Professor Rey said that the Euro may be the closest substitute to the Dollar, but the incomplete architecture of the Euro area and the absence of a Euro area- wide safe asset inhibits the internationalisation of the Euro. In context of the Chinese Renminbi, Professor Rey observed that while the use of Renminbi for trade invoicing and cross-border financial transactions has increased, its adoption in international markets is deterred by the capital controls imposed by China, as also the underdeveloped financial system in the country.

Professor Rey also discussed the emergence of private, digital and crypto currencies, which could have a catalytic role in disrupting the international monetary system. Additionally, she discussed the plausibility of a competition among the main Central Banks to develop high tech international payment and settlement systems within a network. Such digital network of payments could help centralize information perfectly and enforce penalties perfectly, which the current monetary system does not address.

The lecture was part of Exim Bank’s Commencement Day Annual Lecture series, which was initiated in 1986 to mark the Bank’s Commencement, and represents the Bank’s ongoing endeavours in encouraging discussions on latest trends in international relations, global trade, finance, investment flows and related economic developments, and in facilitating sharing of opinions by experts. Over the years, Exim Bank’s Annual Lecture series has earned high recognition in Mumbai’s public life.