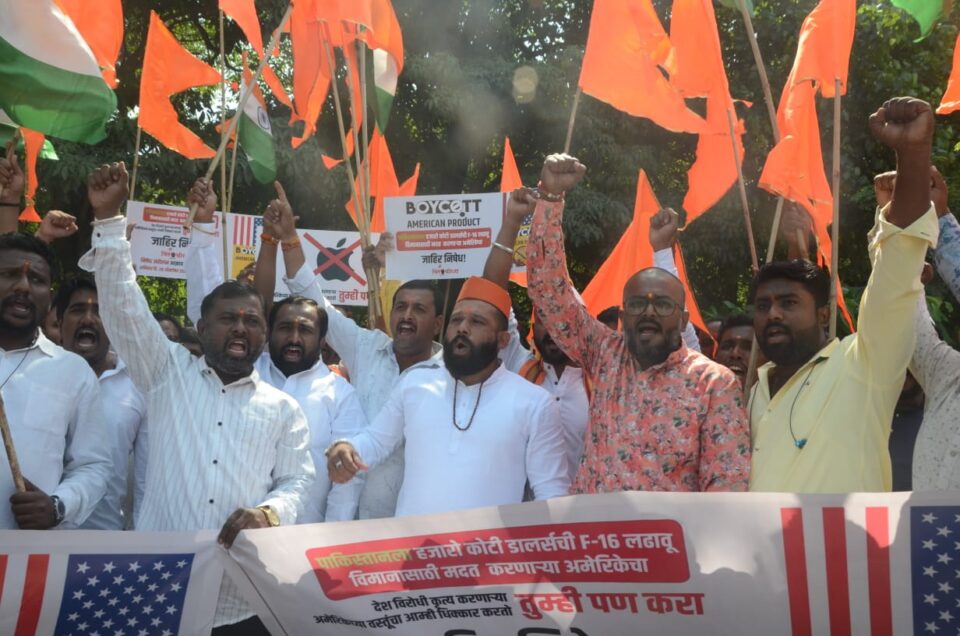 MUMBAI 29 (REP): US President Joe Biden on September 8, 2022 opposed the terror-sponsored decision to give Pakistan $450 million (Rs 3,651 crore) for F-16 fighter jets, which included a ban on US goods from India. It was demanded to apply. The organization staged a strong protest at Azad Maidan in Mumbai today. Hundreds of activists participated in the protest along with Srikant Ranjankar, state head of Veer Yoddha Sangathan of Maharashtra. At the time, there were calls for an embargo on American goods, expressing deep anger about the United States’ pro-terrorist stance. Strong announcements were made to ban American products like Amazon Netflix, Coca Cola etc. At that time, the Boycott America hashtag was at the forefront of America’s role.

The leader of the movement Ranjankar further said, “There is a direct link between terrorism and Pakistan across the world as shown by the terrorist attacks of 9/11, 26/11 and it was the same F16 aircraft with the help of which Pakistan carried out the Balaghat airstrike. In such a situation, we feel that the US is directly promoting terrorism by providing financial support for such fighter jets. Indian External Affairs Minister S Jaishankar and Defense Minister Rajnath Singh strongly objected to this US-Pakistan deal.

Western countries have a history of fighting two countries to achieve their interests. It is despicable that America is doing business like this to sell its weapons. If America uses its income by selling its goods in the Indian market to help a country like Pakistan which nurtures terrorism, it is an insult to the soldiers who are fighting day and night for India and its martyrs. Who sacrificed for the country. At the same time, objections raised by the Wall Street Journal on the central government’s strong economic stance are also reprehensible. Also, this advertisement is an insult to all Indians. Talking to the media, Ranjankar said that he is protesting strongly today, for which it is necessary to stand by the people of India while aggressively opposing the selfish attitude of America. Ranjankar also said that keeping in mind the sentiments of all Indians, we have requested Prime Minister Narendra Modi to ban all goods sold in the market in America.