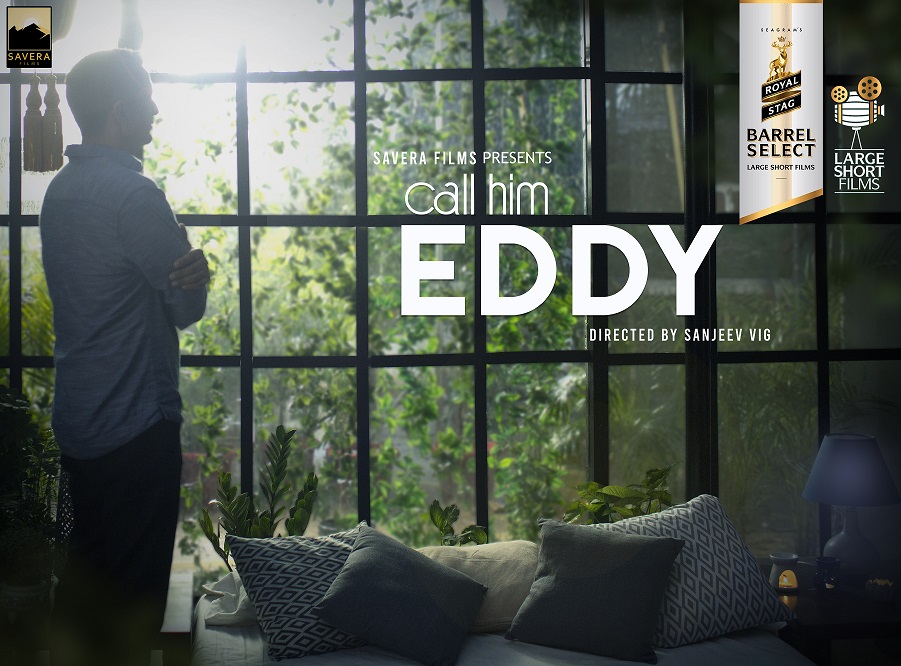 New Delhi, August 21, 2020: Royal Stag Barrel Select Large Short Films’ “Call him Eddy” brings forth the idea of hiring warmth for company. The film, directed by Sanjeev Vig, Produced by Savera Films. The film delves into the life of Eddy, played by Sanjay Suri, who’s platonic comfort is a bundle of joy for people seeking it, but is often viewed with suspicion by those mistrustful of his intentions. Professional cuddling as a service, which is as simple as ordering a warm cup of latte for many, is still a rare profession and service in many parts of the world.

Riya, played by Eisha Chopra, is a documentary film maker is also doubtful that what Eddy does is anything but a stressbuster and decides to visit him. It is this staged encounter that unfolds a seemingly odd profession for the viewers and what goes in the mind of a man who is as easily misunderstood as his is understanding of people’s emotions.

Speaking on the occasion, Sanjay Suri said, “At a time when virtual world impacted human relationships & communication, a script like “Call Him Eddy” was offered to me. For me it was, “love at first read”. I remember telling the director that this film must be made with or without me. Am fortunate that I got to play Eddy. “A hug does more than what many words can do”. I think during such trying times when people could not even see their loved ones, losing them forever, it’s a huge price to pay only to realize how important a comforting touch can be. Call him Eddy brings out an emotion that emoticons cannot justify.”

Talking about the experience, Eisha Chopra said, “I’ve always felt human touch was one of the most basic needs for a person to thrive, and to even just survive. Even the small moment of affection can heal and release years of baggage. So when Sanjeev offered me this role, I didn’t even need to read the script because it reflected everything that I believed in. And strangely, this year we’ve all had to experience this in a way that we’d never had imagined.”

The cast and crew of the film recently took to their social media profiles with a unique campaign called #WhosYourEddy asking their friends and followers to share pictures of moments where they felt comforted by other people, pets, pillows or even stuffed toys, The campaign is underlines the magic of human touch, warm hugs and a little bit of kindness for when one is feeling low.

Royal Stag Barrel Select Large Short Films is one of the most influential and celebrated platforms for short films in India. Since its inception the platform has released some of the most prodigious and award winning short films with renowned artists and directors from the industry which truly reflect originality and creativity. With slew of powerful films, Royal Stag Barrel Select Large Short Films is the perfect stage that provides a canvas for directors and actors to tell compelling stories within 15-20 minutes. Through its powerful content, the platform has successfully built a loyal community of short film movie buffs.

Royal Stag Barrel Select Large Short Films has become ‘the’ destination for Indian short films where viewers can experience the taste of great films. The platform has collaborated with successful storytellers from Bollywood who truly stand for originality and creativity. Large Short Films has evolved to create an ecosystem for aspiring directors to feature along mainstream Bollywood directors and still be able to create a niche for themselves in the industry.

Royal Stag Barrel Select Large Short Films has released some of the most prodigious award winning short films with renowned artists and directors from the industry which truly reflects originality, imagination and perfection.  Ahalya, Interior Café – Night, Ouch, Chutney, Anukul, Mumbai Varanasi Express, Khool Aali Chithi, The School Bag, Bruno and Juliet, ‘Shunyata’, Juice, Maa, Chhuri, Her First Time and Iktarfa are some of the phenomenal films that have been released on this platform. Royal Stag Barrel Select Large Short Films as a platform for original short films has been the pioneer in popularizing this genre of filmmaking.

Royal Stag Barrel Select is the premium offering of Royal stag for the discerning consumer who seeks an evolved taste. It is for the young, confident, progressive and inspiring individuals who have tasted their first success, want to be seen as the one with discerning taste, evolving in their journey of life

With an aim to skill, reskill and upskill country’s youth in the shipping sector, The Ministry of Skill Development & Entrepreneurship partners with The Ministry of Shipping. – Adarsh Maharashtra

NSDC and Simplilearn Announce Collaboration to Upskill Professionals in Digital Skills  ·       The partnership will help deliver learning in digital skills and technologies  ·       Access to over 1,000 hours of free eLearning, available exclusively on the Simplilearn Android and iOS mobile apps. – Adarsh Maharashtra