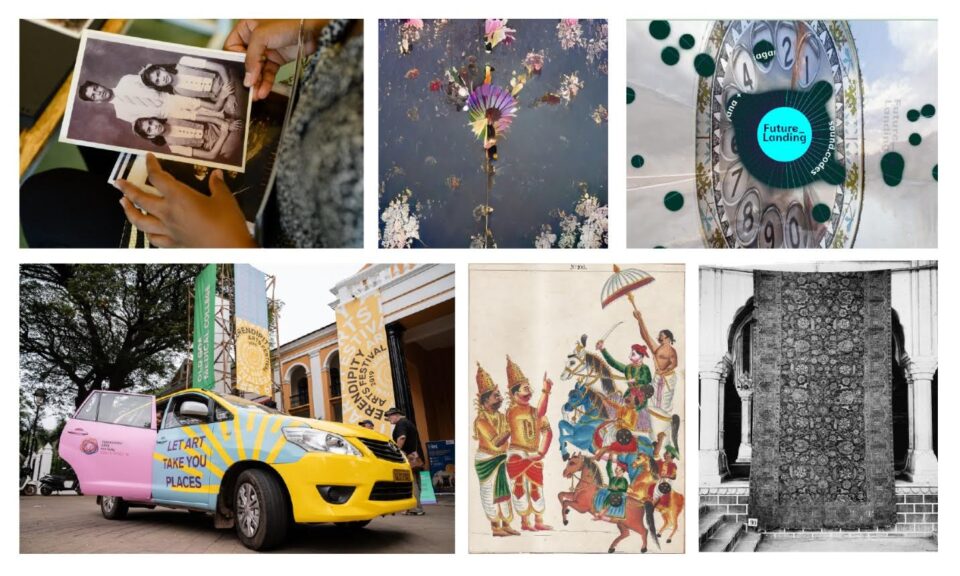 New Delhi, 12th December 2022: Serendipity Arts Festival, is set to present a series of interdisciplinary activations to energize Goa with various exhibitions, workshops and an engaging display of art, an integral part of the Festival’s mission to make art accessible to all.
The festival, scheduled from the 15th to the 23rd of December, will highlight India’s rich music, dance, and theatre traditions alongside culinary arts, talks & symposiums, and workshops. Taking place across 14+ venues and 120+ programs, the Festival will be showcasing diverse creative expressions from across South Asia. It will create avenues for the younger generation to connect with their shared cultural heritage through a wide range of the arts and cutting-edge technology.

The Exhibitions segment of the 9-day Festival will see curations by Pramod Kumar KG at the Old GMC Complex titled India by Book in the 21st Century, which will showcase a plethora of specialist books on the art history of India through a fascinating and immersive exhibition. His curation also includes projects like Forgotten Carpets of the Jaipur Court: Craft and the Promise of the Archive, highlighting the need for active archival efforts towards craft documentation and artwork preservation.
Anjana Somany, will bring forth the world of craft and its rich traditions of materiality through space-making in the project titled, Srijan: Space Making Craft Practices of India. Speaking about the curation Ms. Anjana Somany, Curator, Serendipity Arts Festival said, “Space-making crafts have been an integral part of vernacular building practices in India. Look closely and each one has a story of its own- stories of shared histories and innovation. This exhibition space is an attempt to look at these practices with a new lens while keeping the tradition alive by giving them applications in modern contexts to reimagine the craft.”
This section will also has curations by our previous edition curators Sudarshan Shetty and Veerangana Solanki, who are leading the projects of visual arts. Sudarashan’s curation will revolve around liminal spaces between wakefulness and dream, between perceptions of fact and fiction and individual representations of both through the work of seven artists as part of an exhibition titled, Who is Asleep Who is Awake. Along with that is Future Landing: The Arcade which was conceptualized by Veerangana Solanki in 2020, beginning the exploration of the online virtual space, with five artists. This December, the exhibition will feature the works of ten artists shifting their works from the digital to the physical.
Speaking about her curation and association with the festival, Ms. Veerangana Solanki, Curator, Serendipity Arts Festival said, “Curating Future Landing as a team for Serendipity Arts Virtual Festival in 2020 was quite unique and special not just in terms of having the opportunity to curate something online but also the spirit with which the entire experience panned out. In terms of the collaborative nature of the project, Future Landing carried forward the interactive and interpersonal platforms that Serendipity as a live festival has always offered and it’s great to be working in the physical realm again as an extension of the virtual. In terms of curation, Future Landing really helped push boundaries of what we think of as control and boundaries when curating and exhibiting by being more open to change and letting go of control in how the artists’ projects unraveled with time. Future Landing: The Arcade will carry forward the element of experience through interactive activation by the viewers with the aim to extend memory and control beyond just the space, the exhibitions and the artworks.”
Also on display will be a host of special projects like 4×4: Four Galleries, Four Voices, a special insertion in festival programme this year to showcase some current artistic practices from across the region, represented by 4 galleries in Delhi (Shrine Empire and GallerySKE), Kolkata (Experimenter) and Mumbai (TARQ).
Featuring projects from around the world, the festival has a line-up of institutional collaborators like the Institut Francais India, CNAP (Centre national des arts plastiques), Paris, Jeu de Paume, Paris, Swiss Arts Council Pro Helvetia, the Embassy of the Kingdom of Netherlands, Istituto Italiano Di Cultura, and the Embassy of the Dominican Republic in India, who have come on board as partners owing to the festival’s collaborative and liberal outlook.
These international collaborations, have resulted into projects like and Terra Nullius: Excavations from Image 3.0 by Pascal Beausse and Rahaab Allana; and Somewhere Ethereal by Mathieu Wothke, among others, which is presenting six artworks from some of the most sought after digital artists worldwide. Drawing inspiration from the concept of “somewhere ethereal”, artworks from Wannerstedt, Snowfro, Six N. Five, Cyril Lancelin, Luna Ikuta, and Maalavidaa co-exist in the physical space and explore what NFTs could be – from CGI to generative art to digital art. There are also special film screenings, projections and performances curated by Harkat Studio, as well as exhibitions by Serendipity Arts grantees, 2020-21.

Another defining exhibition will be the one by Dr. Jyotindra Jain and Jutta Jain-Neubauer, which will contextualize the Company School paintings within the emergent Indo-British visual culture of the 18th and 19th centuries largely.
Then there will be a spectacle of the analogue with the digital. Austrian archivist and artist Lukas Birk will organise an installation and workshop on the Box Camera and Camera Obscura, where he will share details about the history of box cameras. Goa Familia, curated by Lina Vincent and Akshay Mahajan, will showcase the many layers of human interaction with the place and present a comprehensive archive of the Goan cultural history and traditions.

Points of public engagement with art by including public arts projects like Time Repeats by Daku or the project titled The Island That Never Gets Flooded: A Public Arts Project by Serendipity Arts Grant with artists like Amche Mollem, Diptej Vernekar, Julien Segard, Nityan Unnikrishnan, Salil Chaturvedi, and Tinu Verghis will deliver a range of outcomes through community involvement.

The success of the Foundation and its flagship public arts outreach initiative rests on its recall and ability to spark conversations and build connections. To realize this yardstick of success, the Festival’s programming also has a strong line-up of Talks and Symposia. This space has been programmed to keep the flow of conversations on the rudimentary and reflective attributes of the arts and are an opportunity to ride on the sea of change that art and culture as an ecosystem is witnessing.

Laced with topical sessions like The Future of Art with Technology, A Workshop of NFT’s: A Game Changer for the Arts & Creative Economy discussions and conversations will revolve around the shifting paradigms and changing face of the arts and its interdisciplinary attributes.

The Workshop segment in the Festival will range from curations around the culinary arts by Prahlad Sukhtankar, along with a host of special projects by Vishal Rawlley, Pavitra Chari, Abhinay Khoparzi and Farah Mulla, Kaamna Patel, Dadi Pudumjee covering environmental sustainability, self-awareness, music, theatre, dance and choreography, films and more.

Sukhtankar will organize multiple culinary arts workshops with experts talking about various elements of food, traditional culinary practices from numerous communities, and food histories from across the country The festival will provide a unique gastronomic experience celebrating the integral role of spice in Indian cuisine, creating different blends and achieving different expressions and flavours of cuisines. The workshops will also have sessions on sustainable food practices.

The festival is expanding in both scope and scale, and there is an effort to take the art beyond performance spaces and develop a dynamic and intimate relationship between artists’ creativity and society at large. Projects have been curated to engage the public and increase awareness of how art can impact the community and society by driving accessibility and sustainability through technology. This also includes how NFTs are disrupting multiple sectors, from art to gaming, by putting power back in the hands of creators and artists.
Speaking about the exhibitions, talks and workshops Ms. Smriti Rajgarhia, Director, Serendipity Arts Foundation & Festival said, “We have a broad range of culinary and accessibility workshops at the festival. Exhibitions range from the world of specialist books on the art history of India to a showcase of craft and its rich traditions of materiality through space-making, and visual arts exhibitions on film, archives and the intersection of art and technology. The talks will cover topical themes in the arts and look at future trends and alternate practices and our workshops will engage with a diverse audience to increase access to the arts.” Adding further she said, “In its completeness, this year’s festival is about experimentation with the traditional and the contemporary, the physical and the digital and addressing the need to take the arts to the people, by offering new experiences to our audiences”.

About Serendipity Arts Foundation
Serendipity Arts is an arts and cultural development foundation created to encourage and support the arts as a significant contributor to civil society. It aims to promote new creative strategies, artistic interventions, and cultural partnerships that are responsive and seek to address the social, cultural, and environmental milieu of South Asia. Committed to innovation, SA intends to promote and create platforms for creativity, providing the wider public with a unique source of contemporary art and culture. SA programmes are designed and initiated through collaborations with partners across a multitude of fields, and each intervention uses the arts to impact education, create social initiatives, foster community development, and explore multi-disciplinarity forays in the arts, with a special focus on South Asia.
About Serendipity Arts Festival
The Foundation’s primary initiative and largest project, Serendipity Arts Festival is a multi-disciplinary arts event held annually every December in Goa. Curated by a panel of eminent artists and institutional figures, the Festival is a long-term cultural project that hopes to instigate positive change across the arts in India on a large scale. Spanning the visual, performing and culinary arts, the Festival’s programming includes music, dance, visual arts, craft, photography, film, and theatre. The Festival addresses pressing social issues such as arts education and pedagogy, cultural patronage, interdisciplinary discourse, and access to the arts. Serendipity Arts Festival’s intensive programme of exhibitions and performances is energised by spaces for social and educational engagement. The fifth edition of the Serendipity Arts Festival will take place in Goa from 15-23 December 2022.

Goldmedal Electricals flags off exclusive branding on the metro trains