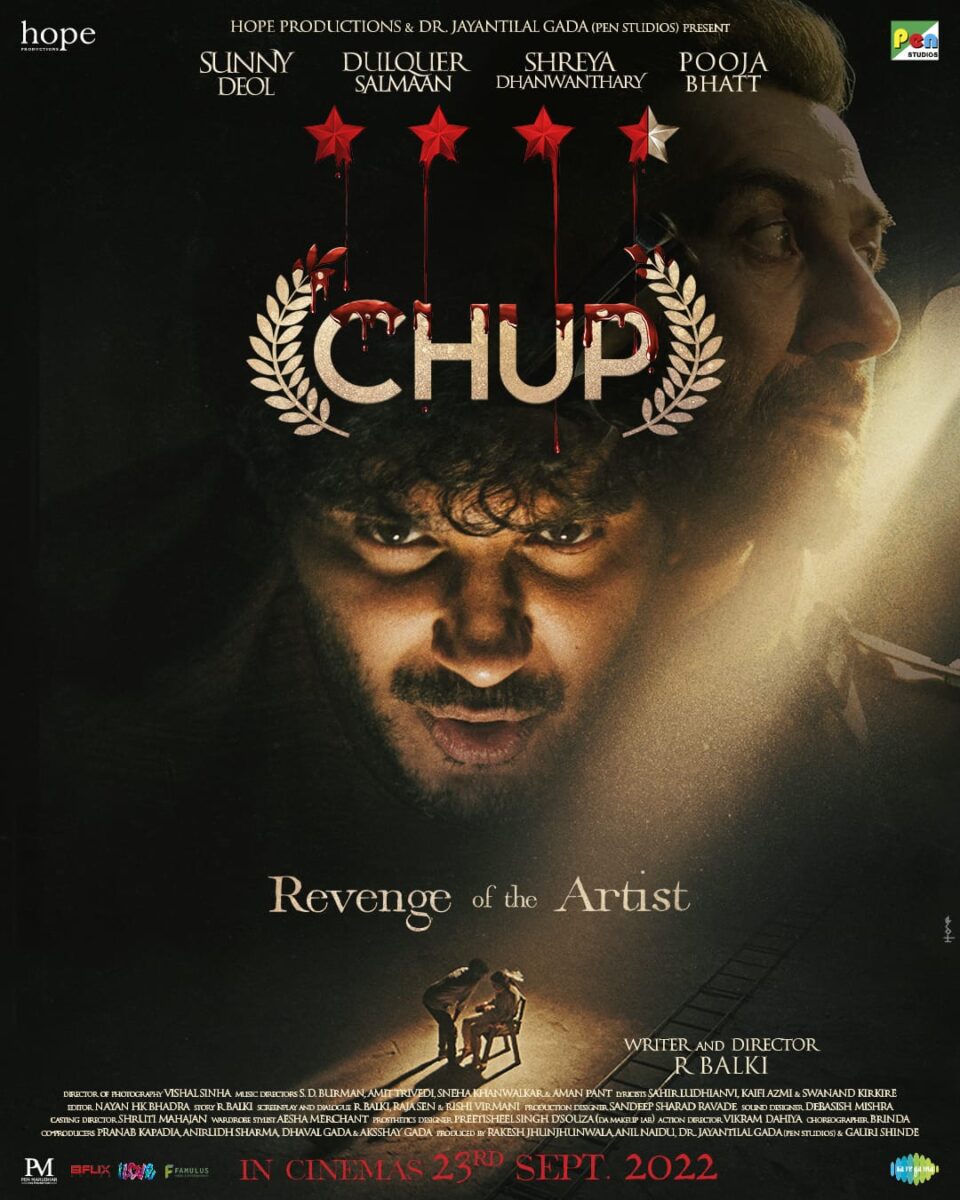 Director R Balki has given Hindi Cinema some out-of-the-course tales to savour. With some atypical stories like Cheeni Kam, Paa, Padman and others, R Balki continues to give some admirable gems to Bollywood. The unconventional director is back with yet another of his unusual stories with Chup:Revenge Of The Artist. The psychological thriller is R Balki’s debut in the genre of blood and kills. It takes the legendary directors Guru Dutt’s last film “Kagaaz ke phool” as a reference and takes a sensitive stance to depict the pain of an artist who suffers from wrong criticism.

The recently released trailer of the film gained a thrilling response from the fans as it exuded a retro vibe surrounding the suspense thriller. It’s an incredible masterpiece in today’s Cinema and the audience already expressed their eagerness to watch it. A thriller of global significance, the movie is being conceptually touted as the first-of-its-kind in the world.

R Balki releases the first song of the psychological thriller ‘Gaya Gaya Gaya’ and it essentially gives us a twist of romance and thrill. While the music and the duo – Dulqer Salmaan and Shreya Dhanvantary are seen giving a romantic layering to the song, the recurring flashes of the murder mysteries during the video keep the thrilling vibe unspoiled. The song comes from the incredible direction of Music Director Amit Trivedi and is woven by lyricist Swanand Kirkire. The composition is recorded in the melodious voices of Rupali Moghe and Shashwat Singh, and perfectly compliments the essence of the mentally stimulating movie.

Commenting on the composition of the song, Music Director Amit Trivedi said – “Chup is a versatile film and it comes from a one-of-a-kind storyline. We had to compose something that could fall in line with the film’s essence and we found ‘Gaya Gaya Gaya’. We necessarily focused to keep the romantic element of the song alive without losing on the film’s enigmatic hint in it. The song is incredibly written by Swanand Kirkire and sung by two talented singers. The entire music score of the film is soon to release and we definitely look forward to it.”

“Amit trivedi has done a fabulous job. Music score becomes important for any film and most importantly its connection to the film. Chup is an unusual fusion of romance and thrill, and its music had to involve the two. ‘Gaya Gaya Gaya’ aptly includes the enigmatic elements of the film and I am happy with the flow of it. The entire score is mesmerizing and we are looking forward to releasing them all soon” – expressed R. Balki on the release of the song.

Headlining a power-packed cast of the film is Sunny Deol, Dulquer Salmaan the South Cinema Superstar, Shreya Dhanwanthary, who made a mark for herself with Scam: 1992, and Pooja Bhatt, who recently made a massive comeback with Bombay Begums. The movie is directed by R Balki and Produced by Hope Productions and Rakesh Jhunjhunwala. The film is written by R Balki himself based on the story he started working on a few years ago. The screenplay and dialogues have been co-written by R Balki, critic-turned-writer Raja Sen and Rishi Virmani.

Dr. Jayantilal Gada (Pen Studios) presents the film and all India distribution is by Pen Marudhar. The Director of Photography is Vishal Sinha and Music Director is Amit Trivedi, Sneha Khanvilkar and Aman Pant. Pranab Kapadia and Anirudh Sharma are Co-Producers of the film. The music is on Saregamapa.

The film is set to release on September 23 and end all of its fans’ built-up intrigue!

Tech Mahindra Partners with Google, contributing to the launch of Street View in India