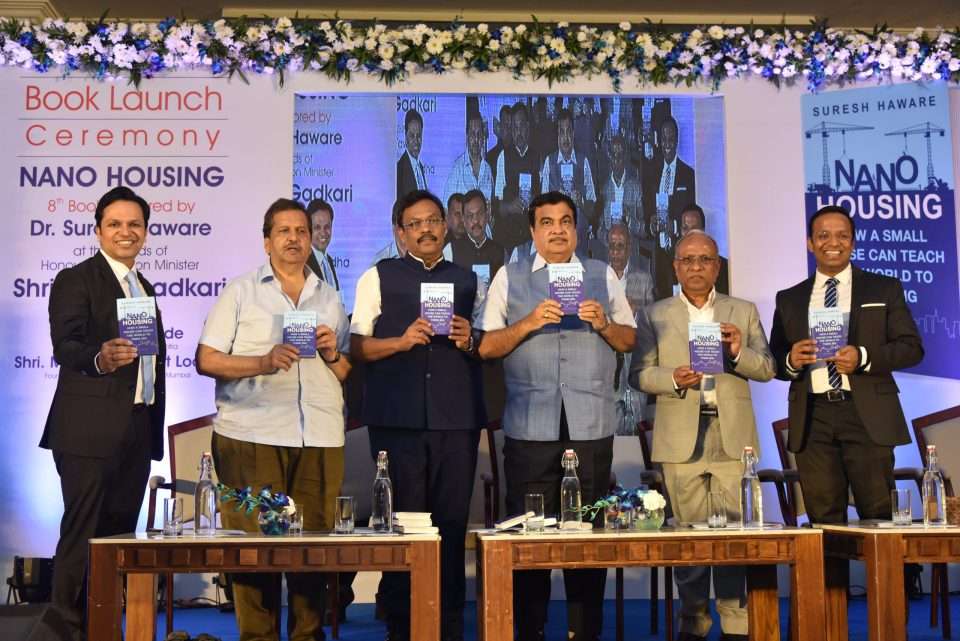 According to 2011 census about 60 million (6 crores) households in India will not be able to afford formal housing at market rates. Affordable housing for the masses is a key challenge for governments and policymakers. Nano Housing aims to offer affordable Housing for All, one of the leading visions of Hon. Prime Minister, Shri Narendra Modi.s

Astonishingly as per the book, more than 40 percent of families in India’s financial capital Mumbai reside in overcrowded, shanty localities.

Nano Housing concept is the outcome of extensive research at Mumbai university based on Blue Ocean Strategy and is the potential answer to mounting real estate prices and tanking demand in the sector. The well-structured book offers a comprehensive analysis of India’s housing demands at city and rural levels as well thought recommendations at the policy level and for other stakeholders to re-drive the growth in this segment.

With skyrocketing property prices in cities like Mumbai, the demand for nano homes, offering a wide range of carpet area (1RK, 1BHK, 2BHK etc) has surged in the past years, especially in Mumbai and MMR region. Availing a nano home seems to be a suitable option via easily available small loans converted into EMIs on an appreciating asset. Nano Housing authored by me comprehensively covers this segment, facilitating potential Nano home buyers as a beginner’s guide,’’ said Dr Haware at launch. The book is useful to the home makers, academicians, policy makers, students, architects, financiers and all.p

Speakingn in a similar tone, Honourable Nitin Gadkari added, “Citing the current price surge in India’s real estate sector, a large chunk of the country’s population simply can’t afford to procure houses. The next cycle of growth in the sector will be propelled by affordability and not luxury in India. In the coming years, we will aggressively focus on developing an ecosystem including innovative technologies to bring down the costs of homes without compromising quality.’’

Furthermore, the book also extensively covers the underutilized potential of rental housing highlighting the fact that as per a census in 2011 there are two million locked properties in Maharashtra alone which could have reaped significant rental incomes. At the same time it may well be noted that the housing deficit of Maharashtra is 19 million houses. This means, if these locked houses could be made available for habitation it will resolve to a great extent the short fall in the housing demand.

‘’Quality, affordability and availability of housing plays a critical role in the economic successes of a country and despite being a high potential segment, the real estate industry in India is yet to bank on Nano Housing. It is also important to understand that this concept will demand a collective effort from all stakeholders of the industry to make the ambitious ‘’Housing for All’’ initiative a successful reality,’’ said Shri Vinod Tawde.

Speaking in a similar tone, Shri Mangal Prabhat Lodha added,’’ I am of the firm opinion that this is the right time for developers to walk an extra mile and offer quality, affordable housing in India. Millennial homebuyers prefer affordability and strategic locations over large homes in distant locations which is the driving factor for Nano Housing concept. The industry will have to focus on capturing the housing demands of millennials in years to come to serve as the growth engine of the country.’’

The book Nano Housing reflects the needs of over 18.6 million homes shortage in India. The deeply researched and a scientifically approached book projects how India can resolve the Housing for All project, by having households able to live with all amenities at an affordable price. The book helps an individual, a professional, an entrepreneur to draw inferences from the stupendous journey of Dr Suresh Haware and having built 45 thousand homes for the last over 25 years. Book covers a unique chapter on ‘How a small house can teach the world to think big.’

Dr S Haware or Suresh Kashinath Haware is a former nuclear scientist, before he turned into an entrepreneur. Haware Properties under the leadership of Dr Suresh Haware, has bagged many prestigious awards including Glory of India award from the Institute of Economic Studies (IES) and Artists in Concrete Award.

Dr. Suresh Haware is also a senior member of the Rashtriya Swayam Sevak Sangh(RSS) as well as the chairman of Shri Sai Baba Sansthan Trust, Shirdi, the governing and administrative body of Shri Saibaba’s Samadhi Temple. The book comes as the eighth launch by Dr Suresh Haware, following his previous publication ‘’Shidori’’ last year which highlighted his noble contributions to society as a nuclear scientist, a successful entrepreneur and a legendary social worker.

Nano Housing will be available at all major book outlets across India and on amazon etc, will strengthen his legacy of multidimensional empowerment of the society.

Microsoft introduces the Power Platform Return to the Workplace solution in India  Solution designed to help organizations prepare for the return to physical workplaces. – Adarsh Maharashtra