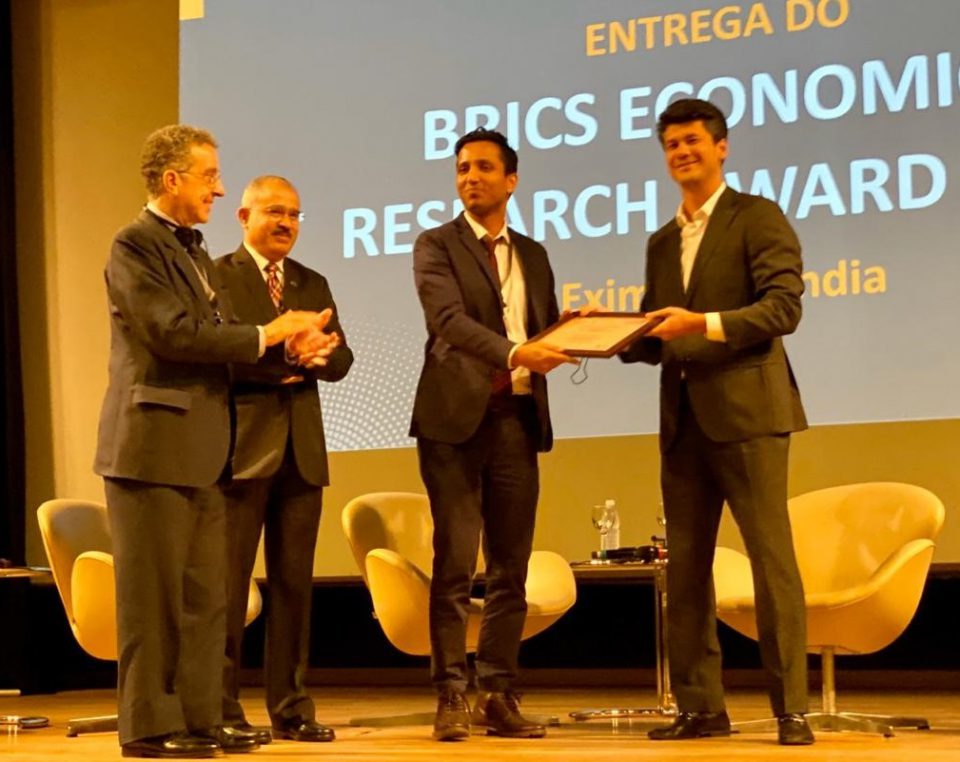 Mumbai, November 14, 2019: Dr. Tushar Bharati was declared the winner of Export-Import Bank of India’s (Exim Bank’s) BRICS Economic Research Award 2019 for his doctoral thesis titled “Essays on Education and Institutions in Developing Countries”, during the 9th Annual BRICS Financial Forum hosted by the Brazilian National Bank for Economic and Social Development (BNDES) together with Brazilian Center for International Relations (CEBRI), on November 12, 2019, in Rio de Janeiro, Brazil. The Award comprises prize money of Indian Rupees 1.5 million (approximately USD 22,000), a medal and a citation. The Award was presented to the winner by Mr. Gustavo Montezano, President of BNDES, in the presence of Dr. José Pio Borges, Chairman of the Board of Trustees of CEBRI and David Rasquinha, Managing Director, Exim Bank, and the top officials of the member development banks from BRICS viz VEB Russia; China Development Bank (CDB); and Development Bank of Southern Africa (DBSA). The Exim Bank’s occasional paper based on Dr. Bharati’s Award winning thesis was also released on the occasion.

In the context of India’s Chairmanship of the BRICS Forum during 2016, and under Exim Bank’s Presidency of the BRICS Interbank Cooperation Mechanism, Exim Bank instituted the BRICS Economic Research Award in March 2016. The objective of the Award is to stimulate and encourage advanced doctoral research on economics related topics of contemporary relevance to the member nations of BRICS.

The BRICS Economic Research Award represents Exim Bank’s on-going efforts at promoting research in the area of international economics, trade & development and related financing. The Award accepted as entries, doctoral thesis written by nationals of any of the five member nations of BRICS, who have been awarded a doctorate or accepted for award of a doctorate from any University or academic institution globally. The details of the Award were disseminated globally through advertisements in print and electronic media