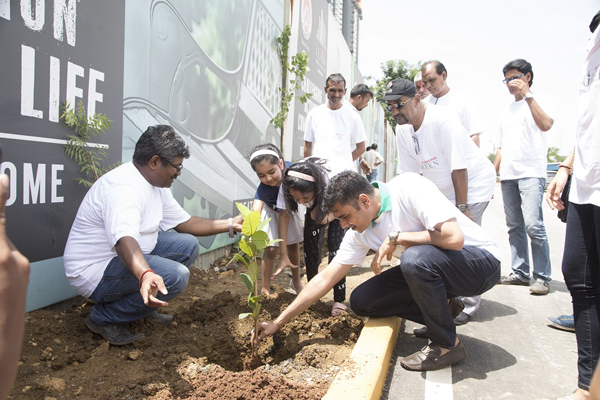 Mumbai, 1 July, 2018: With the objective to preserve and promote the environment, Ajmera Group on its 50th year organized a tree plantation drive ‘i-Green’ at Wadala. Residents of Ajmera and various other citizens gathered to plant 300+ trees across various species.

Ajmera Group has been working towards helping save the environment and care for its citizens. This drive was distinct, given its focus on not just planting the trees but also sustaining them. Another major idea of this initiative was to inculcate the importance of social & cultural responsibility towards nature amongst the key members of their residents.

To motivate this initiative, Mr. Dhaval Ajmera, Director, Ajmera Group, joined the enthusiastic residents of Wadala in planting more than 300 plants across 11 species in a single day. Apart from strengthening the land across the area, the plantation will also bring in seasonal flowers and pleasant breeze in the vicinity.

Director of Ajmera Group – Mr. Dhaval Ajmera was quoted as saying, “This rapid loss of natural forest across India is an increasing cause of concern. As a group, we are committed to sustainable growth. We will continue to take such initiatives that contribute to make our society greener and healthier.

Ajmera has carefully selected plant species like the Gulmohar, Peltophorum, Bamboo, Mahogany, Lagerstroemia, Alstonia, Bakul, Cassia Fistula, Cassia Siamea, Bauhinia (Champaka ) and Karanj which will be planted during the drive. These species of plants attract a lot of different kinds of birds along with squirrels, butterflies etc. which helps in maintaining a balance between the flora and fauna of the region. It also helps in making the area visually appealing for its residents and visitors alike.

About Ajmera: Founded in 1966, 50 years back, the group is best known for bringing the mall culture in India alongside developing townships. They developed Asia’s largest township in Mira Road with 1500 buildings and 17000 apartments. Quality, innovative construction technology, comfort, aesthetic appeal and maximum value for your money are few attributes that enrich Ajmera Group with the belief that people have entrusted in them. Ajmera is BSE & NSE (India) listed. The reach and interest of the Ajmera Group has only grown with time and has extended to other realms, such as steel, cement, power, education and social welfare. The company now has a strong presence in and around Mumbai, Pune, Ahmedabad, Surat, Rajkot and Bangalore as well as an international project in Bahrain

Young Star Academy enters into a strategic partnership with Wolves, one of the biggest football clubs in England, to promote football in India.