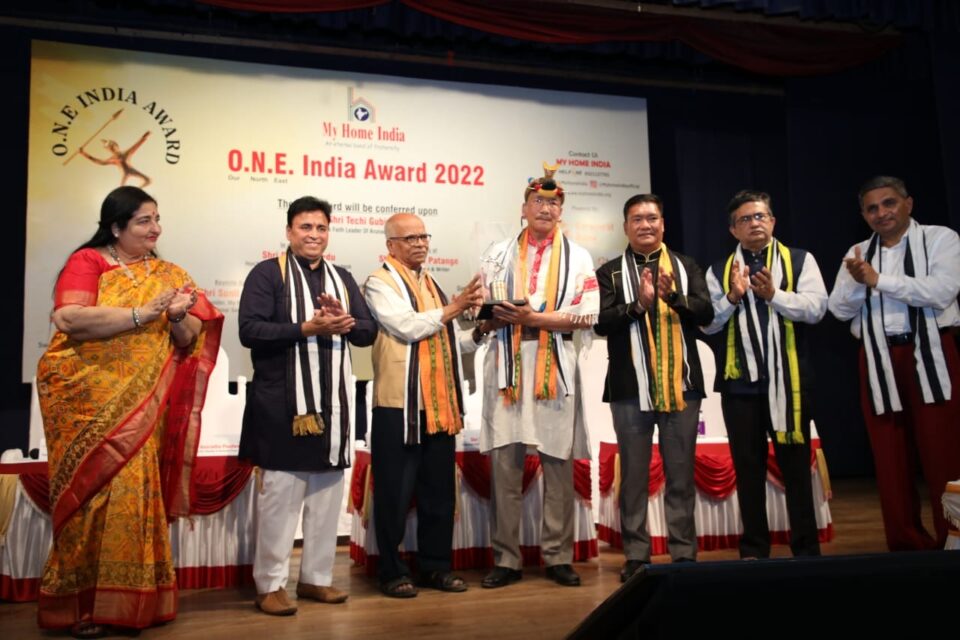 Speaking on the occasion Techi Gubin said, “People of Maharashtra are very generous. They adopt children form Arunachal Pradesh, educate them, groom them and send back to their parents.

Conversation was at peak in Arunachal in early 70s. Gubin and his like-minded friends opposed it tooth and nail. But nothing much happened. “Despite our efforts religious conversion continued. We launched Indigenous Faith movement launched in 1988. And in 2001 Shraddha Jagran Kendra was established. Today there are 600 kendras across the state. Churches are being built even in Buddhist areas in Tawang where there are no christians, we are strongly opposing it. This is the modus operandi of Missionaries to slowly penetrate in new areas and carry out conversation. We are carrying out Ghar vapsi through Shraddha Jagran Kendra, ” Gubin said.

Addressing the gathering Sunil Deodhar, founder of My Home India and National General Seceretary BJP said, “The past governments of the country have always neglected North Eastern states. The apathy of then Prime Minister Jawaharlal Nehru was such that, he didn’t act despite getting information about Chinese invasion into Assam in 1962. But India has come aong way under the leadership of PM Narendra Modi. Now any such incident is dealth with strongly. India will not compromise on even an inch of land. The world has witnessed this in Doklam and now in Tawang.” Congress always used North East to mint money, he said.

Over the last 15 years, My Home India has reunited over 3100 children with their families. Out of these 500 were from North East.

Arunachal Pradesh CM Pema Khandu said, “NAMASTE sums up the entire North East. Arunachal is the state that shares border with three countries, Bhutan, Myanmar and Tibet. The state with massive diversity is also lang of severla opportunities. Last eight years under the leadership of PM Narendra Modi have been highly eventful. Earlier no PM would visit North East. But Modi visited the region 60 times in last eight years, which shows the concern he has for the people of North East and their development.”

One union minister visits NE every 15 days, this has resolved many issues about development. Earlier North East was known for insurgency, corruption and drug trade. But now, all the eight states working as team, insurgency almost been eliminated. “Our past leaders failed to recognise opportunities in NE, but PM Modi recognised it and working to realise it.” Religious onversation is major issue in Arunachal, it is our duty to protect and conserve indigenous culture and faiths, Khandu added. Currently massive infrastructure development is taking place in Arunachal Pradesh. The biggest indication is that, super cars and bikes owners from Mumbai and Delhi come to Arunachal. He also said that it was high time that we corrected our history taught in schools. “Dstorted history has burried ture heros of Arunachal Pradesh and destroyed future of youths. We want to rewrite the history to tell the truth, ” Khandu said.

Techi Gubin, an architect by education is currently serving as Director, Housing of Arunachal Pradesh Government. He had been very actively involved in preservation, protection & promotion of Indigenous faith of Nyishi community in particular (to which he belongs) & Tribal communities in general. He had been Secretary of Nyishi Indigenous Faith & Cultural Society (NIFCS) when he began with weekly prayer system of the community & constructed traditional prayer centres of the community known as Nedar Nyamlo. Within a span of 20 years 40 Nyamlos have come up facilitating congregation of Nyshi youth, women & elders.

It was due to efforts like these that the state government set up a new department named Department of Indigenous faith and cultural affairs.

Techi Gubin is also part of Indigenous Faith & Cultural Society of Arunachal Pradesh that organizes youth festival every three years. Youth from all the 26 major and 126 sub communities participate in the festival.

Techi Gubin is currently President of the Arunachal Vikas Parishad. During his tenure as General Secretary of the organisation, in 2010, “Seemant Darshan Yatra” was initiated wherein a total of 91 delegates visited villages bordering China and hoisted national flag on January 26. It was observed that most of the border villages were without any Indian Army posts. The matter was escalated to the President of India and a report was submitted. As a response 52 new posts of ITBP were installed and adequate manpower was made available for the existing posts. Second Seemant Darshan Yatra was organized in 2021.

ICONIC BRANDS OF MAHARASHTRA AWARDS 2022 Held at Mumbai on 17th Dec, CM Eknath Shinde Graces the event by wishing all the Awardees

Shadowfax announces winners of Champions League; the top three winners were awarded a car, bike, and a trip to Thailand