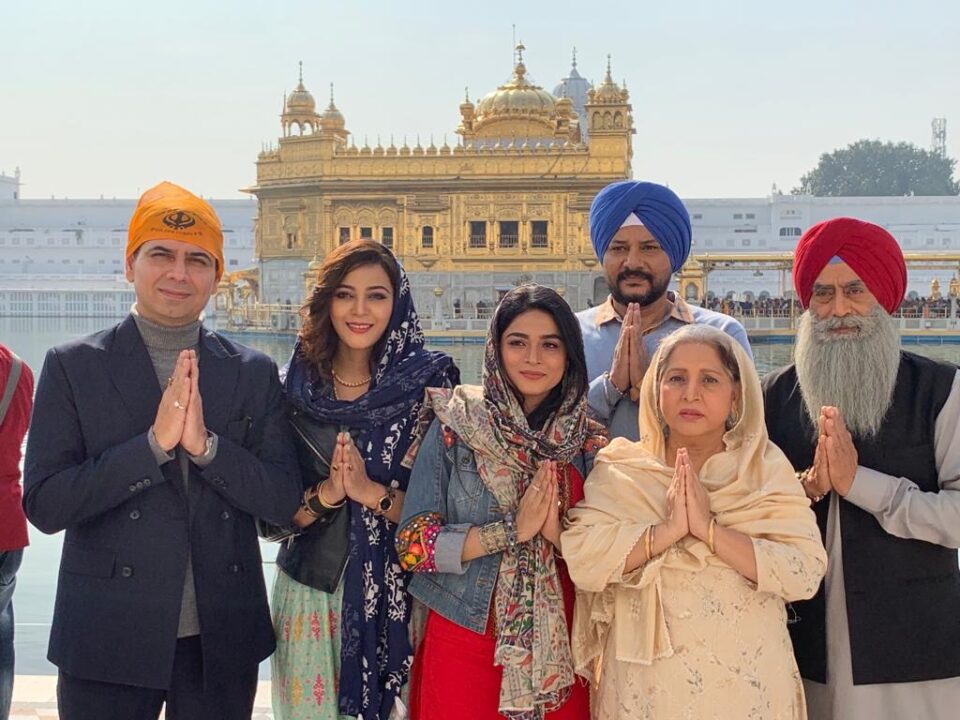 An auspicious start to any new venture or endeavor cannot begin without the blessings of the almighty. So, when the cast of Sony SAB’s upcoming show Dil Diyaan Gallaan got the golden chance to seek the blessings of Waheguru ji at the Golden Temple in Amritsar, they cherished it!

Sony SAB’s soon to be launch new show Dil Diyaan Gallaan is a migration story that is emotional yet told from the lens of positivity and hope. The lead star cast of the show comprising noted actor Pankaj Berry, Jasjeet Babbar, Sandeep Baswana, Ravi Gossain, Kaveri Priyam, and Hema Sood, visited the Golden Temple in Amritsar to seek the blessings of Waheguru ji. The show depicts the relationship dynamics of three generations of the family. It’s a story of conflict – with physical and emotional distances among family members in which the first two generations refuse to forgive and forget their pasts but are compelled to face and rebuild their relations after the third generation ensues that bridges must be mended.

On the surface, the family is divided by distance, but it is torn apart by misunderstood circumstances, hurt emotions, and ingrained beliefs. The much-anticipated Sony SAB show will air soon. The Hindi-language tv serial is produced by Rashmi Sharma.

Pankaj Berry, aka Dilpreet, in the show ​

“As a Punjabi, Amritsar is close to my heart, and I have been visiting my family here ever since. Before embarking on this new journey of our show ‘Dil Diyaan Gallaan’, we consider it auspicious to take the blessings of our Waheguru Ji. The experience of visiting the Golden Temple was surreal. This place gives a feeling that is found nowhere else, just like the feeling of being with your family and loved ones. My new show on Sony SAB also throws light on relationships and family as the story depicts the conflict – with physical and emotional distances among family members. I will be playing the character of a strong dignified Indian Punjabi father expecting a lot from his children. I am excited and I hope the audience relates to the show too.”

“I am fortunate to have started the show’s journey by visiting the Golden Temple. I am deeply grateful for the blessings of the Almighty. My avatar will be a responsible, tenacious, intelligent, and charming young woman. I am eager to play a modern but traditional character. The show builds bridges – uniting people in relationships and us with the Sony SAB audiences. We hope the audience will respond positively.”

Sandeep Baswana, aka Mandeep
“My visit to the Golden Temple has given me a positive energy boost. I value how Sony SAB has a beautiful way of telling the story through the lens of positivity and hope. This show presents a fresh perspective on how families can be divided because of misunderstandings and how ignorance shouldn’t control your relationships. I look forward to how the audiences respond to the emotional story of the three generations.”

Launched in March 2005, SONY SAB is part of the network of television channels owned by Sony Pictures Networks India. Sony SAB evolved from its ‘Haste Raho’ tagline in 2017 to ‘Khushiyon Wali Feeling’ in 2019 to now being a channel that tells stories which resonate with the everyday lives of people. The reinvigorated Sony SAB is transitioning even more strongly to being a channel which is forward looking and approaches life’s problems with a lens of hope, offering diverse content, meaningful storytelling, and real emotions.

With an impressive line-up of fresh, progressive and value-driven content dealing with the real issues that people face in life, the stories tap into the aspirations of different generations in the family. Sony SAB is dedicated to promoting an enjoyable family-viewing experience and can truly define Sony SAB as the ‘living room brand’ with something to appeal to everyone in the family.

The Company is recognised as an employer of choice within and outside the media industry. It is a recipient of several awards, including India’s Best Companies to Work For 2021 by the Great Place to Work® Institute, India, ‘Aon Best Employers India’ awards in recognition

of the company’s unique workplace culture and exceptional people practices, consistently ranking amongst India’s Top 10 Companies with Best Health & Wellness Practices by SHRM & CGP Partners and listed by Working Mother & AVTAR as one of the 100 Best Companies for Women in India.

The Company is in its 28th year of operations in India. Besides having overseas subsidiaries, it has a subsidiary MSM-Worldwide Factual Media Private Limited and an affiliate, Bangla Entertainment Private Limited in India.