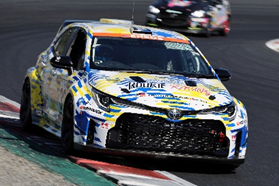 12, December 2022: ROOKIE Racing Co., Ltd. (ROOKIE Racing) and Toyota Motor Corporation (Toyota) announced their competition in the IDEMITSU 1500 SUPER ENDURANCE 2022 (Thailand 25H Endurance Race) at the Chang International Circuit in Thailand from December 17 to 18, 2022. They will race with the ORC ROOKIE GR Corolla H2 concept, a hydrogen engine vehicle *1., and the ORC ROOKIE GR86 CNF Concept, a carbon-neutral fuel vehicle*2. The participation will not be for the entire 25-hours but will be for the first and last few hours of the race. This will be the first time for both vehicles to compete in a race outside of Japan.
In addition, one of the Toyota Gazoo Racing Team Thailand’s vehicles is also going to run on carbon neutral fuels. Starting with participation in the Thailand 25H Endurance Race, ROOKIE Racing and Toyota, will continuously strive to increase and accelerate development of carbon neutral technologies in Asia through motorsports.

This approach will help achieve accessible electrification at scale and speed, supporting each country’s prioritized national objectives, including carbon neutrality, air quality improvement, oil import reduction, industrial development and sustainable employment while providing realistic mobility solutions. In this regard Toyota aims to work towards carbon neutrality, based on the fundamental principles of “Mobility for All” wherein there is a goal to “Leave No One Behind”.

Sharing his thoughts, Mr. Vikram Gulati, Country Head & Executive Vice President of Toyota Kirloskar Motor Pvt. Ltd. (India), said, “Globally, Toyota has been consistently working towards building a sustainable community, living in harmony with nature while advancing the electrified vehicle technologies offerings to suit the mobility needs of each market. In India, we have a vision to realize a ‘Carbon Neutral Society’ by catering to patrons not only through cleaner and greener products but also through entire life cycle including our manufacturing activities. Global Toyota has revised its target timeline of achieving Challenge 3 – Plant Zero CO2 to 2035 from 2050. As a part of this journey, I am glad to state that Toyota Kirloskar Motor (TKM) has successfully achieved 100% renewable energy for grid electricity at our plant facility. Further, we continue to actively contribute towards the realisation of Toyota’s six Global Environmental Challenges by adopting various initiatives & multiple pathways be it freshwater usage reduction, electrified mobility solutions, afforestation, recyclability & waste management, undertaking pilot projects of alternate fuel-based vehicle technologies (such as Ethanol) and so forth.

On product front, at TKM, we are focused on providing mobility choices which are most practical and realistic with an emphasis on mass electrification and promotion of alternate fuels through creation of local manufacturing ecosystem aligning with the government’s “Make in India” initiative. This also includes continuous skill upgradation of our workforce and enhancement of various skill initiatives to develop the youths of India, making them employable, under India’s Skill Mission.

Being a pioneer in electrified technology, our philosophy has always been to shift rapidly towards sustainable mobility solutions and with our recent offerings of Self-charging Strong Hybrid Electric Vehicles – Urban Cruiser Hyryder and Innova Hycross for the customers, we continue to provide electrified vehicle technologies that best meets customer needs, local infrastructure, and energy mix of the country.”

ROOKIE Racing and Toyota’s participation in the Buriram race, showcases the new technologies of hydrogen engine and synthetic fuel vehicles within the region. Furthermore, it solidifies Toyota’s commitment to further expand and accelerate the development of carbon neutral mobility options to Asia, through motorsports.

*3: The Super Taikyu Series is a car endurance racing series for commercially available vehicles that launched in Japan in 1991. Commonly known as “S-Tai” in Japan, the race has come to be known as one of the foremost open-format endurance race series in Asia and has been loved by many fans over the years. It has also seen a growing number of drivers from neighboring Asian countries participate in it during recent years.

About Toyota Motor Asia Pacific
Toyota Motor Asia Pacific [TMAP] is incorporated in Singapore and is the regional corporate headquarters and subsidiary of Toyota Motor Corporation. TMAP leads and supports the Asia Pacific region in sales and marketing activities, service parts, accessories and customer services, thus contributing to the overall development of auto industry and the growing economies in the region.
Toyota envisions the future mobility society to bring freedom of movement to all. Moving forward, Toyota will provide a diverse range of mobility services and transportation solutions to people around the world as we transform Toyota into a mobility company.

Best titles to watch on Netflix this Wedding Season

The makers of Tusshar Kapoor starrer Maarrich have more thrill in store for the audience; the film is shot with multiple endings and the end will be zeroed upon basis audience reactions through the promotional campaign