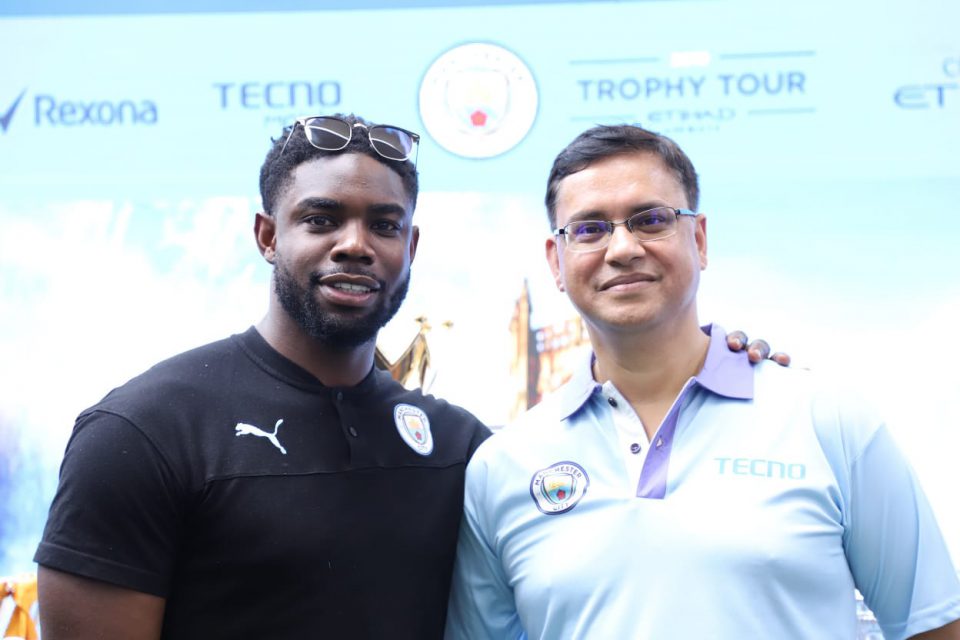 Mumbai, November 22, 2019: TECNO Mobile, a global premier smartphone brand, is associated with the current EPL and FA Cup Champions, Manchester City Football Club since 2016. In July’19, both the partners decided to extend their global partnership through an official signing ceremony that took place in Delhi. This association has been incredibly successful due to the fact that TECNO Mobile and Manchester City follow similar values of holding consumers at the highest pedestal by providing them with unique mobile experiences and exceptional matches every day, respectively.

TECNO Mobile, the leading smartphone brand is taking another step to further strengthen the association with City by becoming their Mobile Photography partner for the India Trophy tour 2019 which spans across multiple cities across India. The partnership helps in fostering greater engagement by giving fans an opportunity to experience the spirit of the game closely.

To celebrate Manchester City’s record-breaking 2018/19 season, Manchester City and TECNO kicked-off with a trophy showcase in Mumbai today, bringing men’s and women’s trophies to India. Located in the heart of the city at Phoenix High Street Mall, the trophies were displayed amongst football fans, sports enthusiasts and TECNO consumers over a fun filled long carnival.

Commenting on the association, Mr. Arijeet Talapatra, CEO, TRANSSION India said, “Our association with the prestigious Champions Club embodies perfection, excellence and passion to succeed beyond limitations is the hallmark for both of us. We are delighted to collaborate with Manchester City Trophy Tour as it celebrates a highly successful season and gear up for a much bigger success in the coming year. Through this strategic partnership that highlights our global as well as local ambitions, we are committed to further strengthen our relationship with the Indian consumers, fans, and the elite football club.”

To further create the excitement for the football fans in India, TECNO organised an exclusive ‘Meet & Greet’ with the legend Micah Richards in Mumbai. After a gruelling skill-based task with thousands of young and aspiring footballers from the Mumbai Celebration Sports Club, 11 enthusiasts were selected with a life time opportunity to learn on ‘How to take perfect Penalty Shot’ from the legend himself.

Commenting on his maiden visit to India, Micah Richards, City Legend said “I am thrilled to visit India as part of Manchester City’s Trophy Tour. Our aim is to bring an authentic City experience, allowing fans in India a chance to experience the club they love closer than ever and right in their hometowns. We have been receiving immense support from the City fans in India and I can’t wait to engage with them all.”

India being one of top priority markets for TECNO Mobile globally, the brand is committed to bring top-end features at an affordable pricing for the value-conscious Indian customers. The brand has been constantly disrupting the sub 15K category and 2019 was a successful year, bolstering the strong product portfolio with many firsts to its credit. ‘CAMON i4’ earned the crown of becoming the first triple rear camera smartphone under 10k and Phantom 9 offered segment-first 6GB RAM, Dual Front Flashlight  and in-display fingerprint sensor at a competitive price of INR 14,999. TECNO SPARK Go was the superstar of the family, emerging as the most affordable dot notch display smartphone in India, and most recently CAMON 12 Air became the first and only ‘Dot In-Display’ camera phone under 10K.

TECNO’s marketing strategy is centred around increasing overall brand awareness and brand recall by establishing a deeper bond with the youth of India.  TECNO’s collaboration with Manchester city is with an objective to strengthen their brands’ outreach in terms of marketing and advertising campaigns across the country.
About TECNO Mobile
TECNO Mobile is a premium smartphone brand from TRANSSION Holdings. Upholding the brand essence of “Expect More”, TECNO is committed to giving the masses access to latest technology at accessible prices, allowing the consumers to reach beyond their current limitations and uncover a world of possibilities. TECNO understands the needs of consumers from different markets and provides them with localized innovations across a product portfolio featuring smartphones, tablets, and feature phones. TECNO is a major global player with presence in around 60 emerging markets across the world. It is also the global Official Tablet and Handset Partner of Manchester City Football Club. For more information, please visit: http://www.tecno-mobile.com

Under manager Pep Guardiola, one of the most highly decorated managers in world football, the Club plays its domestic and UEFA Champions League home fixtures at the Etihad Stadium, a spectacular 55,000 seat arena that City have called home since 2003. Today, the Stadium sits on the wider Etihad Campus, which also encompasses the City Football Academy, a state-of-the-art performance training and youth development facility located in the heart of East Manchester. Featuring a 7,000 capacity Academy Stadium, the City Football Academy is also where Manchester City Women’s Football Club and the Elite Development Squad train on a daily basis and play their competitive home games.

Healthcare Data Monetization and its Future in India – Adarsh Maharashtra

Bausch + Lomb India urges consumers to “Live Better, Live Now” in their latest corporate campaign The digital campaign to comprise of multiple ad films highlighting the importance of changing the lens through which we look at life. – Adarsh Maharashtra