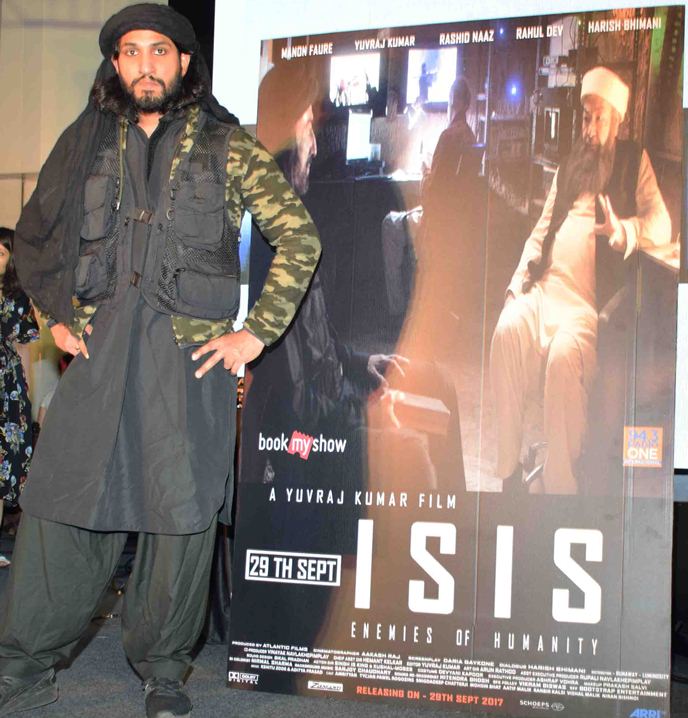 25th September 2017; Mumbai: Trailer of Yuvraj Kumar’s, ISIS Enemies of Humanity was launched at World One Music Festival held at High Street Phoenix in Mumbai today. The launch was witnessed by a large number of ecstatic audience in between musical performances by popular bands from across the country. The event, ‘World One festival’ has been initiated by Yuvraj Kumar for promoting world peace through songs performed by various artists like Reggae Rajahs and Riddim Funktion about global peace harmony and unity. The grand trailer launch was followed by unveiling of the paintings by Siberian artist Dunya Boskan. ISIS Enemies of Humanity is scheduled for release on 29th September 2017.

ISIS Enemies of Humanity is an upcoming Bollywood movie that talks about the functioning of terrorist group, ISIS that has been spreading terror across the globe. The film outlines the sheer importance of Islam in its purest form & defies the Islam which is projected by anti-social elements of the world. ISIS – Enemies of Humanity, the film has the power to end extremism and radicalization, and denounce terrorism and is being released with the same motive. It exposes the Commanders of an ISIS Camp, who Indoctrinate the Youth for Violent Acts. “I am a student of World Politics. Thus when terror attacks gained momentum, it was very natural for me to start looking into it deeply. And through my research on this menace in the era of the 21stcentury, I gained an in-depth learning about the ideologies practiced by terrorist groups”, said Yuvraj Kumar, Director of ISIS Enemies of Humanity.

The movie stars Rahul Dev, Yuvraj Kumar, Harish Bhimani, Manon Faure and Rasheed Naz. The music of the movie is given by Kshitij Zode and produced by Atlantic Films. The movie is Written, Directed and Edited by Yuvraj Kumar himself.

‘Tried to do my bit to make the Indian Sign Language (ISL) the 23rd official language of India!’ : Ranveer Singh