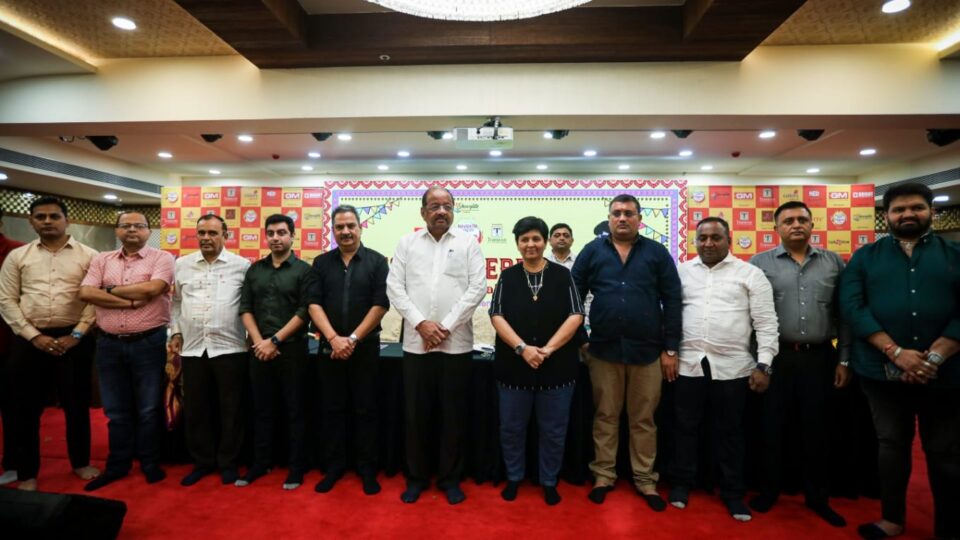 ‘Dandiya Queen’ Falguni Pathak is all set to cast her magic once again at the Navratri festival organized by ‘Show Glitz Events and Entertainment’ at Late Pramod Mahajan Maidan in Borivali. For the last 2 years, due to Covid-19, Navratri festival could not be organized across the country publicly. But now that Navratri in public has been allowed by the administration, once again Falguni Pathak will enthral the people with the magic of her songs in the Gujarati dominated area ‘Borivali’. For 4 years in a row since 2016, she has enthralled music buffs with her velvety voice of folk songs and Bollywood melodies during Navratri celebrations in Borivali.
In a press conference organized by Show Glitz Events and Entertainment in Borivali, Falguni Pathak told reporters that after going through difficult and extraordinary circumstances, now people are back to their normal life once again. Today her fervent prayer to Jagadamba Mata is that the mother goddess may bestow peace, prosperity, safety and security to one and all! Conversing with the media, she expressed a keen desire to see people from her stage, dancing at Navratri.
MP from North Mumbai, Shri Gopal Shetty, who was present at the press conference, said that the people of North Mumbai and especially Borivali celebrate every festival with religious harmony and joy. This is the reason why Maharashtra’s biggest Navratri is going to be held in Borivali for the fifth time in a row. The present government has removed the restrictions on all the festivals. Now is the time to celebrate the longest dance festival of Hindu culture with full devotion and enthusiasm.
On this occasion, Shri Gopal Shetty has appealed to the government to allow 4 days for Navratri festival in the current year till midnight. Going forward, he appealed to the State government that the cases against Navratri organisers should be withdrawn just as they were withdrawn against Govinda and Ganesha organizers.
Show Glitz Events & Entertainment Pvt Ltd is the organizer of this Navratri festival. The director of this company, Santosh Singh, while talking to reporters said that Navratri in Borivali has been made a medium of charity and that is why a part of the proceeds received from organizing this Navratri will be given to cancer victims.
On this occasion, North Mumbai MP Shri Gopal Shetty, ‘Dandiya Queen’ Falguni Pathak, Show Glitz Event & Entertainment Director Santosh Singh, Navratriotsav title sponsor Ramesh Jain (GM Modular) Organizing Committee member Shri Vinay Jain. (Director, Witty International School), Harshil Lalaji, Jignesh Hirani, Sanjay Jain, Rushabh Vasa were present.

5 actors who are the king of music videos