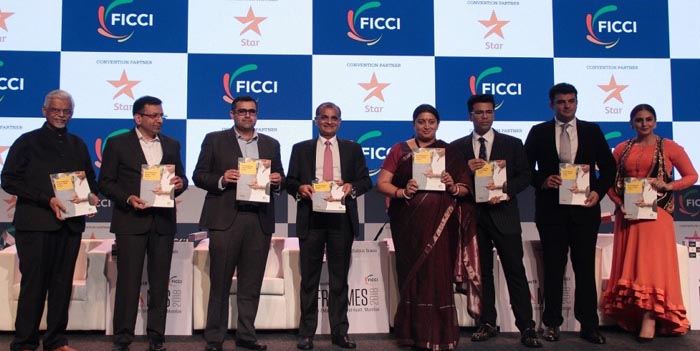 Mumbai, 04 March 2018: The Indian Media and Entertainment (M&E) sector reached almost INR1.5 trillion (US$22.7 billion) in 2017, a growth of around 13% over 2016. With its current trajectory, it is expect to cross INR2 trillion (US$31 billion) by 2020, at a CAGR of 11.6%. The digital segment led growth, demonstrating that advertising budgets are in line with the changing content consumption patterns. The  FICC-EY report ‘Re-imagining India’s M&E sector,’ launched today at FICCIFrames 2018 in Mumbai, captures key insights from the exciting and fast growing Indian M&E sector.

The M&E sector continues to grow at a rate faster than the GDP growth rate, reflecting the growing disposable income led by stable economic growth and changing demographics. The report states that subscription growth outpaced advertising growth in 2017 but advertising will continue to grow till 2020n led by digital advertising.

The report estimates that approximately 1.5 million consumers in India today are digital only and would not normally use traditional media. It is expected that this customer base will to grow to ~4 million by 2020 generating significant digital subscription revenues of approximately 20 billion. Going forward, micropayments, enabled through the Unified Payment Interface (UPI) and Bharat Interface for Money (BHIM) platforms developed by the National Payments Corporation of India (NPCI) will further accelerate subscription revenues for entertainment content.

FICCI President, Mr. Rashesh Shah said that the Indian Media and Entertainment (M&E) industry has been hitting new milestones and has stepped onto a matured phase at a growth rate of 11.6% CAGR.

“The need is to promote India as an entertainment hub to the world, facilitate policy change for the betterment of the Indian M&E industry as well as create and encourage platform for Business-to-Business interface and dialogue,” added Mr. Shah.

Mr. Ashish Pherwani, Partner and M&E Advisor Leader, EY India, “Growth in 2017 was led by the digital, film & animation & VFX segments. We expect sectors like digital and gaming to grow between 2 to 3 times by 2020.”

·         Television:
The TV industry grew from INR594 billion to INR660 billion in 2017, a growth of 11.2% (9.8% net of taxes). Advertising grew to INR267 billion while distribution grew to INR393 billion. Advertising comprised 40% of revenues, while distribution was 60% of total revenues. At a broadcaster level, however, subscription revenues (including international subscription) made up approximately 28% of revenues.

Key insights – While advertising is 41% of the total revenues today, the report expects it to grow to 43% by 2020. There are over 30% households in India which are yet to get television screens, but being at the bottom of the pyramid, these households will tend to move towards first towards free and sachet products.

·         Print:
Print accounted for the second largest share of the Indian M&E sector, growing at 3% to reach INR303 billion in 2017. Print media is estimated to grow at an overall CAGR of approximately 7% till 2020 with vernacular at 8%-9% and English slightly slower. This growth is expected despite the FDI limit remaining unchanged at 26% and therefore, restricting access to foreign print players and the imposition of GST at 5% on the advertising revenues of the print industry for the first time in history. While magazines contributed 4.3% to the total print segment, the segment was at largely status quo with not many significant new launches in 2017.

·         Films:
The Indian film segment grew 27% in 2017 on the back of box office growth – both domestic and international – coupled with increased revenues from sale of satellite and digital rights. All sub-segments, with the exception of home video grew and the film segment reached INR156 billion in 2017. The Hindi films comprise the majority component of the Indian film segment. They contribute almost 40% of the net domestic box office (BO) collections annually, despite comprising only 17% of the films made. Films in 29 other Indian languages account for approximately 75% of the films released but they contribute approximately 50% to the annual domestic box office collections. Hollywood and international films comprise the balance. The top 50 films contributed approximately 97.75% of the total net box office collection. Box office collections of the top 50 films grew by 11.60% in 2017.

Digital media has grown significantly over the past few years, and continues to lead the growth charts on advertising. Subscription revenues are emerging and are expected to make their presence felt by 2020. In 2017, digital media grew 29.4% (27.8% net of the impact of GST) on the back of a 28.8% growth in advertising and a 50% growth in subscription. Subscription, which was just 3.3% of total digital revenues in 2016, is expected to grow to 9% by 2020.

The Indian M&E sector witnessed a relatively new trend in deal activity with emerging segments such as gaming and digital gaining momentum, while the deal activity in the traditional media segments was slower. The slowdown can be partially attributed to challenges faced by the advertising segments of the industry due to demonetization and GST. Overall, the number of transactions in the M&E sector decreased from 56 deals in 2016 to 40 deals in 2017. Further, the total deal value was also lower at US$1,261 million in 2017 compared to US$2,863 million in 2016.