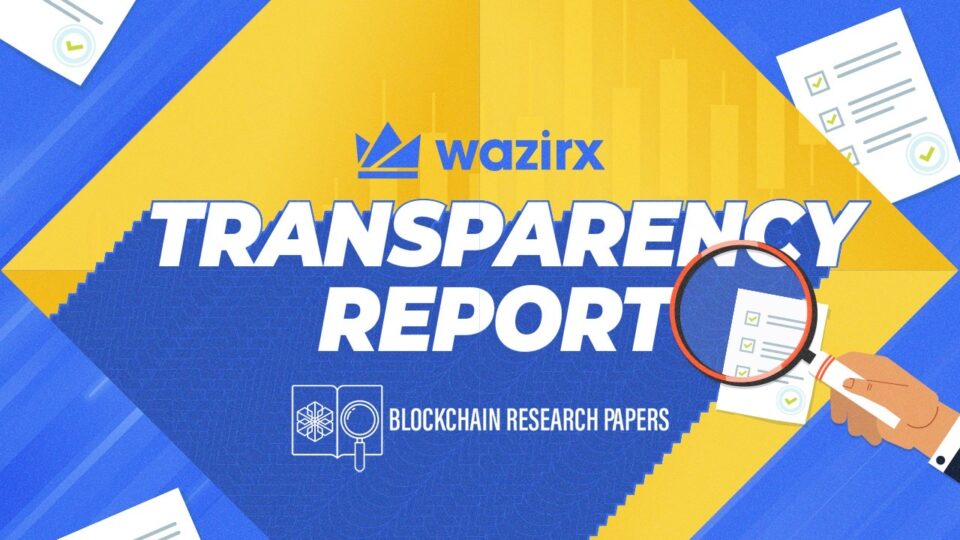 November 29, 2022: In its continued effort to provide transparency to users and safeguard their assets, we have launched the third edition of our Transparency Report. The developments covered in the report occurred between April 2022 and September 2022. The report highlights the company’s initiatives in boosting awareness about Web3, assisting the law enforcement in identifying bad actors, and implementing a full proof onboarding process to ensure security of users. We have also outlined some common trends observed in Crypto scams over this time period which users should be aware of.

The exchange maintained its record of 100% compliance rate for all 828 requests received from Law Enforcement Agencies (LEA). The requests were received against a total of 10Mn transactions during this period. WazirX also proactively identified accounts with suspicious activities with the help of third party platforms, and shared the information with the Financial Investigation Unit (FIU-IND). Our average turnaround time to respond to requests was 18 mins for the first cut response. With the help of our round-the-clock available legal support teams and monitoring infrastructure, we were able to continue assisting the LEAs to the best of our abilities.

Here are some of the major findings:

● Only 0.008% of all transactions during this period were reported/investigated by LEAs
● Recorded an improvement in average turnaround time at 18 minutes for the first cut of the response to LEA, although the recommended duration is 48 to 72 hours, as per IT Act, 2000
● Out of 828 queries received, 764 were by Indian Law Enforcement Agencies, whereas the Foreign LEAs made 64 requests
● The most number of requests came in from regulators and law enforcement agencies in Maharashtra
● Illegal fund transfers, Crypto scams, cheating, and forgery were the most common types of crimes reported, resembling scams in the Traditional Financial sector
● 700+ accounts were blocked during this period. The majority of them were due to requests that came in from users

“We still have some way to go to prevent security risks in Crypto. The level of awareness around Crypto needs to extend to its ill uses too. Only then can mainstream adoption take place in an environment of trust. We will continue our efforts to educate Indians about Crypto, and comply with regulators to ensure any form of fraud with virtual digital assets is tackled. ” Nischal Shetty, CEO, and Founder, WazirX

As per the report, some of the key cases that WazirX assisted the law enforcement (Indian and Foreign) in are:

– In a recent case, a Bitcoin racket being run from Delhi came to the notice of the CBI on being alerted by the Austrian police. Imposters posed as Europol officers and other law enforcement agencies to tell their victims that their identities had been stolen and used for narcotics businesses. The criminals would target foreign nationals for the same. WazirX’s legal team, with assistance from Chainalysis, collaborated with the CBI on this case to block the operation. They identified the accounts which were being used to carry on this racket and blocked withdrawal of the assets that were gained from the criminal proceedings.

– In one of the first Disproportionate asset cases involving Crypto, WazirX helped Bhubaneswar Police identify the Crypto accounts of an engineer who did not reveal his investments in Digital Assets. Upon scrutiny by the team, it was discovered that he had 50-odd Crypto wallets and an investment worth Rs. 2 crores.

– In another incident, the legal team assisted the Kolkata police in nabbing some criminals who were defrauding people through a mobile gaming platform. In this case, ​​a large sum of money was collected from the public via the platform called e-nuggets. The culprits then disabled the withdrawal of money and also removed all data from the app. WazirX helped ED freeze crypto assets worth Rs 12.83 Crores.

– A few months ago, a group of criminals from Ghaziabad, Uttar Pradesh, created an elaborate fake trading app to lure customers and dupe them of huge sums of money. WazirX assisted the Ghaziabad Police real-time in identifying the identities that were linked to the culprits which led to their arrest.

– In Bandra, Mumbai, Maharashtra, the WazirX team helped identify wallets linked to Chinese loan apps which were used to dupe people through fraudulent transactions. The team worked closely with the law enforcement agency to identify the accused and block their operations using Crypto. WazirX cooperated with the investigators by providing them with all the necessary details, information, and documents of the alleged accused companies who used the WazirX platform. After an in-depth internal investigation, WazirX noticed that most of the users whose information was sought by ED were already identified as suspicious by WazirX internally and were blocked in 2020-2021. Due to the active cooperation extended by WazirX and active Anti-money laundering (AML) checks, suspected users were identified.

In terms of the nature of scams, here’s what the percentage looked like for each category:
Sr.No
Categories
Percentage Share
1.
Impersonation
34.7%
2.
Phishing / Airdrop Scams
21.1%
3.
Ponzi Schemes and Social Engineering Scams
40%
4.
Others
4.2%

WazirX has continued its association with TRM Labs, a virtual digital asset compliance platform, to sustain and scale up its efforts of security. It also collaborated with Chainalysis, a platform to analyze blockchain data. WazirX also joined hands with other industry players in the country to form a new crypto advocacy group called Bharat Web3 Association (BWA).

WazirX launched a course on Blockchain Technology to educate individuals. This was in collaboration with Gurukula Kangri in Haridwar, a deemed-to-be university, as per the University Grants Commission (UGC). Since its initiation, the course has seen more than 20,000 enrolments. We recently awarded the completion certificate to 400+ individuals. 7.4% of them were females. Uttar Pradesh saw the highest number of enrolments in the program (25.4%) among all participating states.

They can send an email to legal@wazirx.com from the ofﬁcial email ID of the law enforcement agency along with a duly authorized written request.

About WazirX
WazirX is an India-based crypto exchange that allows users to buy, sell, and trade various crypto assets like Bitcoin, Ether, Litecoin, and more. Today, it is India’s largest crypto exchange by volume and has over 15 million users. Founded by Nischal Shetty, Siddharth Menon, and Sameer Mhatre, WazirX aims to make crypto accessible to every Indian.

Acharya Prashant is 2022 “Most Influential Vegan”