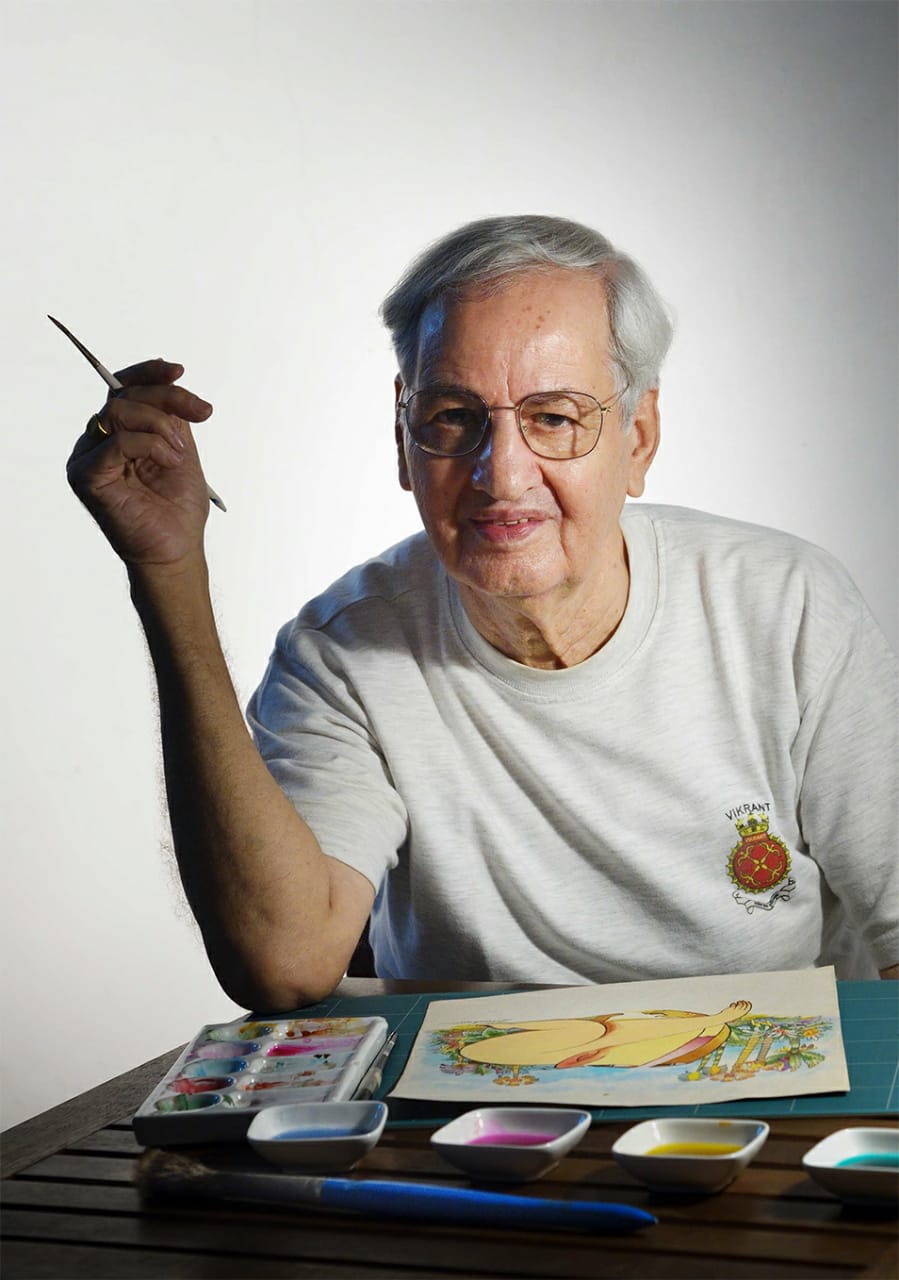 Heliophobia’, Oenophobia, ‘Illynngophobia’, ‘Scopophobia’ and more such works depicting the fear of falling in love, fear of sound, fear of stairs, fear of wine, fear of ageing and more to showcase at Jehangir art gallery from 28th June to 4th July

Its all in the mind, they say. Senior artist Dinshaw Mogrelia is all set to showcase his thematic work on the mysterious world of phobias in his maiden, solo art show at Jehangir art gallery, M.G. Road, Kala Ghoda, Mumbai 400 001, from 28th June to 4th July 2022 between 11 am to 7 pm. His deep understanding of human emotions and ability to translate them into comprehensive rendering via their pictorial images has been his sole passion which finds an important emergence in his art practice spanning over 6 decades.

Born in 1939, This is his first art show in life and although being a professional artist, he did not display the thematic work in any art gallery earlier. He is very active even at this age and his work is deeply influenced by understanding of Phobias and its effects on the human mind.

This work is in water colours and pen and ink and reveals subtle nuances of the mysterious world of phobias and fears leading to general anxiety/ disorders in human beings in his unique style of pictorial images. Some of the distinct works that make you ponder deeply are ‘Heliophobia’ that depicts the fear of the sun, ‘Scopophobia’ which highlights the fear of being seen or stared at and pushes the individual to be in the background, ‘Illynngophobia’ which throws light on the fear of of feeling dizzy when looking down or afraid of being really high up, ‘Pharmacophobia’ shows the fear of taking medicine. Wine is considered to be one of the most coveted drinks, but here’s an art work titled ‘Oenophobia’ that shows the fear of wine. Falling in love is a great journey but there are individuals suffering from fear of love of being in love, depicted beautifully in the work ‘Philophobia’.

Phobia is an excessive and irrational reaction of mind that is fuelled by fear. It can also be termed fear psychosis or syndrome which is present in a human being. Whatever may be the source of fear leading to the paralysing effect experienced by human being, the expression of Phobia generally surfaces in his mind leading to specific gestures or movements.

These symptoms grow over a period of years and continue to deeply influence the human mind and its psychology unless healed by proper means and duly checked in time by the strenuous efforts. The fear can be of a certain place, crowd, a problematic situation, or an object or anything else that strongly influence the general mental status and emotions of human beings. The artist has displayed 120 types of phobia in his pictorial images in the present series thereby trying to acquaint public about such hazardous psychological happenings that disturb the welfare of the human mind. He has in a way compiled his work of more than 60 years which illustrates his deep engagement and fascination with phobia over past 6 decades.

Dinshaw Mogrelia hails from Nashik where he was born 21st June 1939. He shifted to Mumbai in 1947 when India got freedom. He graduated from Sir J.J. School of arts, Mumbai in 1964. Then he took up a professional career and worked in the field of art and advertising and designing in the relevant industries. He was a recipient of some prestigious prizes and awards from reputed institutions. He was a sufferer of Phobias himself while in his young age due to several turbulent times and circumstances faced by him during his service period also.

“We hope that this series will duly enlighten the viewers, masses and art lovers about the hazardous and perilous realisms of Phobia in order to be aware of its serious implication if not checked in time and also, the sanctity of general curiosity about Phobia and its relevance in human life”, shares the 83 year old artist at the onset of his maiden show.

He further adds, “It is hoped that this show will be blessed with a positive and overwhelming public response and appreciations due to its uniqueness”

Aneri Vajani’s Style Quotient is an inspiration to all