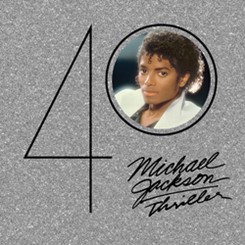 November 21, 2022 – New York, NY – In celebration of its 40th anniversary, Sony Music and the Estate of Michael Jackson have announced the release of Thriller 40, a double CD set comprised of Michael’s original masterpiece Thriller and an exciting second disc full of surprises for fans including never-released tracks which were worked on by Michael for the Thriller album. To date, the album has amassed in excess of 100 million in sales worldwide.

Immersive audio mixes of Thriller are now available at various DSPs, including 360 Reality Audio on Amazon, Spatial Audio on Apple Music, mixed by Serban Ghenea from the original masters for immersive audio, with the immersive mixes by John Hanes.

The original Thriller album, on vinyl, is also available today at Walmart and Target. The Walmart exclusive has an alternate cover; the Target exclusive includes a Thriller 40 Slipmat. Mobile Fidelity Sound Lab (MoFi) has the original Thriller album available as an UltraDisc One-Step 180g 33RPM LP and a hybrid SACD. The MoFi One-Step is sourced from the original 1/2″ / 30 IPS / analog master tapes to DSD 256 to analog console to lathe, pressed at RTI, and strictly limited to 40,000 numbered copies.

Transferred from the original film master of each short film, for the first time ever, 4k versions of the “Beat It” and “Thriller” short films are now available – watch HERE.

A new animated lyric video for “Wanna Be Startin’ Somethin’” will be out on November 21. Watch the teaser HERE.

The release of Thriller 40 celebrates the 40th anniversary of the biggest selling album of all time worldwide. The pop up events and worldwide activations planned to honor the King of Pop’s masterpiece kicked off with the immersive experience in Dusseldorf, Germany last week. Next up is the immersive event in New York, New York which starts today and runs through the weekend. More information on all of the activations HERE.

In addition, SiriusXM is launching The Michael Jackson Channel, a special limited-engagement channel to commemorate The King of Pop’s legendary career from his early days in The Jackson 5 to his solo career. The Michael Jackson Channel, which includes a Thriller special hosted by Jackson family friend and music historian Steven Ivory, will air on Limited Edition 2 (ch. 502) November 23 through December 22 and on The Groove (ch. 50) from November 23 until Wednesday, November 29.

Michael’s epic creation won a record setting 8 Grammys, smashed musical barriers and changed the frontiers of pop music and music videos forever. Michael Jackson’s Thriller has spent more than 500 weeks on the Billboard album chart and has sold over 100 million albums since its release on November 30, 1982.

Malayalam films that you can binge watch this weekend

BACARDÍ NH7 Weekender returns to Pune with Promises to Pulsate to Sounds of Iconic Music Maestros: Fresh Line-Up of Indie Talent from Across the Globe all set to Debut this season