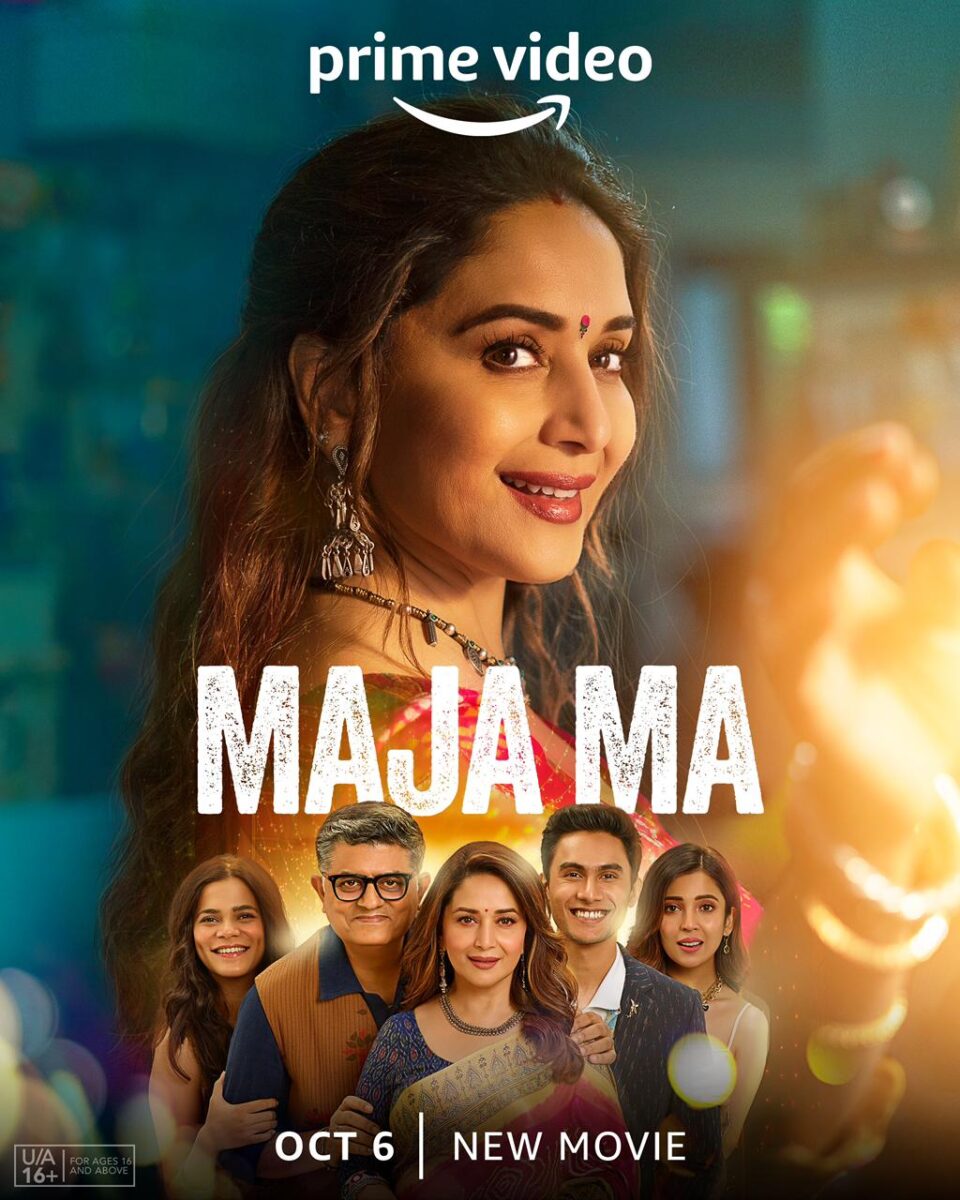 MUMBAI, India—22 September, 2022— Prime Video today unveiled the trailer of its highly anticipated, first Indian Amazon Original movie – Maja Ma. The movie presents the original queen of Bollywood- Madhuri Dixit, in a complex and fearless avatar. Along with her, the family entertainer boasts of a stellar cast with veterans as well as fresh faces of the industry including Gajraj Rao, Ritwik Bhowmik, Barkha Singh, Srishti Shrivastava, Rajit Kapur, Simone Singh, Sheeba Chaddha, Malhar Thakar and Ninad Kamat, who bring this warm, light-hearted yet thought provoking drama to life. Produced by Leo Media Collective and Amritpal Singh Bindra, directed by Anand Tiwari and written by Sumit Batheja, Maja Ma will premiere exclusively on Prime Video on 6 October in India and more than 240 countries and territories. A true-blue Bollywood entertainer, Maja Ma is set against the celebratory backdrop of a traditional festival and a lively, colourful wedding, with a story that will tug at your heartstrings.

The just launched trailer gives us a glimpse into the life of Pallavi (essayed by Madhuri Dixit) – a delightful woman who is the backbone of her middle-class family and the society she lives in, around whom the movie revolves. As a series of events unfold, a life that she has built with so much love starts to fall apart, putting her son’s upcoming engagement in jeopardy. The conflict tests existing relationships for resilience, understanding and beliefs. What is this unprecedented situation? How will Pallavi and her family deal with the turmoil? Will this bring the families closer or will the new relationships crumble? Watch this complete entertainer, that packs punches and twists, to know more.

“I am thrilled to be a part of Prime Video’s first Indian Amazon Original Movie”, said the legendary actress Madhuri Dixit. “With Maja Ma, what I am most excited about is my character. It is a role with complex nuances that I have never played before. Pallavi Patel carries enormous responsibility around – as a mother, as a wife and as a contributing member of society with such ease and grace, that it becomes easy to overlook her strength, conviction, and resilience. She goes through a multitude of emotions that could have strong repercussions on her life and the lives of people she loves.”
She further added, “I am so excited to share this film with my fans and audiences. Working with the cast and crew of the film has been a lovely experience. I am thrilled that Prime Video is taking Maja Ma to audiences worldwide. This piece of our heart, our hard work, will find love with audiences looking for heartfelt storytelling everywhere in the world.”

“You will see me play a middle-class man, a father to young adults and husband to a loving wife, in Maja Ma,” said Gajraj Rao, talking about the movie and his character. “However, as you watch the movie, the character traverses through some interesting, sometimes challenging, not to mention unexpected situations in his life. Working with the whole team – Madhuri Dixit, all cast members and the creators – was a great experience. I am quite sure the audiences will love the movie. I am really looking forward to seeing the audience reactions as the movie gets a global premiere across 240 countries and territories with Prime Video.”

“I play a mamma’s boy. And how can I not, when the mamma is the gorgeous and doting, Madhuri Dixit herself,” said Ritwik Bhowmik. “Tejas is a sincere yet aspirational young man. He is still finding himself, traversing his ambitions and his intrinsic value system. This role is very special for me as it is my debut movie and my third outing on Prime Video. Maja Ma is also my third time working with the director, Anand Tiwari. He brings out the best in us, in the most effortless manner. I am truly enthralled to have shared this space with so many talented actors of the industry. What will stay with me is the experience we had in bringing this movie to life – such a great time with one big happy family on the sets.”

“I am so excited to be playing Esha. My character has great balance – despite having been brought up by orthodox NRI parents, she has modern American traits while still having Indian sensibilities. She is her own woman, confident and free spirited,” said Barkha Singh. “There are such dynamic character arcs in the film, which every cast member has done complete justice to, guided by the clarity of Anand Sir’s vision. It was an amazing experience working with the whole team, especially Madhuri ma’am. It has been a privilege to share screen space with her.”

Commenting upon the upcoming movie and her character, Srishti Shrivastava said, “It is every actor’s dream to dabble in various mediums of entertainment and to have their work reach out to audiences across a wide spectrum. I have worked in many movies and series across various mediums earlier but doing Maja Ma was another level of excitement. My character Tara has been very well etched as a strong, feisty and progressive young woman. Working with Madhuri ji and Gajraj ji was an absolute honor and privilege, to the say the least. Ritwik, Barkha and the rest of the Maja Ma Team made the experience even more enriching and memorable. I cannot wait – for the movie, the music, and the story to reach audiences. I am excited for the worldwide premiere of Maja Ma on Prime Video.”

Amazon Original Movie Maja Ma will be available to stream on Prime Video from 6 October in more than 240 countries and territories.
Maja Ma is a part of Prime Video’s festive line-up for the Great Indian Festival 2022 starting 23rd September onwards. The line-up also includes several other original series and blockbuster movies across multiple languages, in addition to attractive “Diwali Special Discounts” from partners through Prime Video Channels.